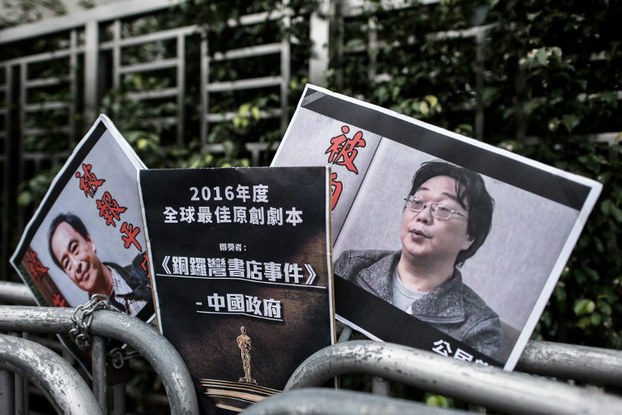 The first of five Hong Kong booksellers detained in mainland China since October over sales of political books across the internal border has returned to the city, local media reported on Friday.
“The Hong Kong Police Force met with Lui Por who has returned to Hong Kong from the Mainland this morning,” the police said in a statement on the Hong Kong Special Administrative Region (SAR) government website.

Lui Por’s name has previously also been spelled in English as Lui Bo.

“Lui Por requested Police to cancel his missing person case and stated that he did not require any assistance from the Hong Kong Special Administrative Region Government or Police,” it said, adding: “He refused to disclose other details.”

It said police will continue to follow through with the missing persons reports for three other booksellers via Interpol.

The five managers and staff of the now-closed Causeway Bay Books store have all appeared in television interviews filmed in China in recent weeks, with four confessing to running an ‘illegal’ bookselling business, and a fifth, a British passport holder, saying he is willing to sever all ties with the UK.

Causeway Bay Books store manager Lee Bo, 65, was last seen at work in Hong Kong on Dec. 30, while four of his associates, publisher Gui Minhai, general manager Lui, and colleagues Cheung Chi-ping and Lam Wing-kei were all detained in opaque circumstances since October.

“We again express our concern over this type of public ‘confessions,’ something that many hoped had ended in China decades ago. In a country ruled
by law charges are brought in court, and the defendant responds to charges only in the presence of legal counsel,” said the statement, which was posted on the embassy’s website.

At a time of rising tensions between Hong Kong and mainland China sparked by fears of growing interference by Beijing in the day-to-day running of the city, Chinese officials appeared to send out a reassuring message ahead of the opening of the country’s annual parliament on Saturday.

Chinese government advisers present at the meeting told Hong Kong media that Zhang said that anyone who breaks the law should be brought to justice.

“Their position on one country, two systems won’t change,” he said. “He said Hong Kong should take every opportunity to boost economic development, because only that would solve the problem,” Chan said.

“Then he talked about rule of law and stability, and said that the rule of law would take care of recent events [in Mongkok].”

The comments are the first indication of reactions to the unrest in the corridors of power, as opposed to the political posturing of China’s state-run media.

Edward Leung, a spokesman for the “localist” group Hong Kong Indigenous, which campaigns to preserve the city’s traditional freedoms and cultural heritage, said Beijing’s attitude to the Mong Kok clashes should make no difference, however.

“We don’t really care what sort of signal they are sending us, and we never have cared,” Leung said. “All I care about is how the people of Hong Kong see it.”

“They should be the only people we are answerable to, not them [in Beijing].”

But NPC deputy Rita Fan warned that “more work” needs to be done among the city’s young people, suggesting Beijing may step up its efforts to promote “patriotic education” in the city’s schools, in spite of 2009 mass protests against the plan.

“Our youth are getting educational materials that are very one-sided, so it’s hard to blame them for their views on a lot of things,” Fan said.

“I think that we have a duty to teach them and help them, so that can make an informed choice about what they read.”

Meanwhile, a national security conference in China has described the 79-day Umbrella Movement in 2014 as a form of “color revolution,” suggesting Beijing still regards the pro-democracy movement as a threat to stability, TVB news reported on Thursday.

“The Occupy Central movement was anything but loving and peaceful, but was a string of violent clashes under the guise of calling for universal suffrage,” an information board at the exhibition in Beijing said.

Three leaders of the 2014 pro-democracy Umbrella Movement in Hong Kong are defending themselves this week against government charges linked to a mass sit-in during a week-long class boycott that kicked off the Occupy Central movement.

Joshua Wong, 19, who heads the academic activist group Scholarism, Alex Chow, 25, former secretary-general of the Hong Kong Federation of Students, and Nathan Law, 22, current leader of the student federation, are on trial for “unlawful assembly” and “inciting others to unlawful assembly.”

The Occupy movement campaigned for Beijing to withdraw an Aug, 31, 2014 electoral reform plan from the NPC standing committee, which it rejected as “fake universal suffrage,” and to allow publicly nominated candidates to run for chief executive in 2017.

The plan, which offered a one-person, one-vote in 2017 elections for chief executive, but required candidates to be vetted by Beijing, was voted down on June 18, 2015 by 28 votes to eight in Hong Kong’s Legislative Council, leaving the city with its existing voting arrangements still in place.

Reported by Wen Yuqing for RFA’s Cantonese Service. Translated and written in English by Luisetta Mudie.