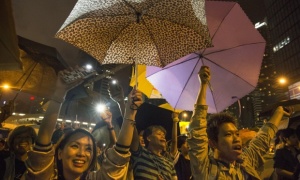 The first badge identifies her as a full-time employee of a pro-government newspaper. Every day, her employer condemns the unprecedented protests, now in their second month, for wreaking havoc on the city’s transportation networks and economic vitality. The second card identifies her as a volunteer reporter for an outspoken Facebook-based news outlet with more than 100,000 subscribers.

One badge always obscures the other. By day, she displays the first. By night, as she camps out in protest zones and faces down riot police, she displays the second. Few protesters read her newspaper, but most have probably seen her work.

Alice Lau is a pseudonym. Revealing her name or employer could get her fired, she said, and revealing her Facebook platform could invite undue scrutiny. “It’s not like I want people to think I’m a hero,” she said over iced milk tea at a McDonald’s in Admiralty district, the protest’s de facto core. “I just feel like I need to use my talents to help Hong Kong, to help my community. I’m just an ordinary citizen.”

Hong Kong’s traditional media is suffering a crisis of confidence. Many of the city’s most influential newspapers and TV stations are owned by local tycoons who, wary of jeopardising their mainland business ties, have taken great pains to maintain a conservative editorial line. The city’s young people have responded by turning to social media for news – and thus, the ongoing “umbrella movement” may be the best-documented social movement in history, with even its quieter moments generating a maelstrom of status updates, shares and likes.
For detail please visit here