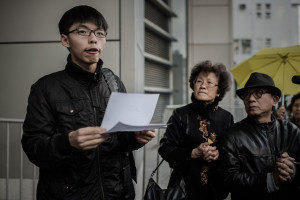 Umbrella Movement student leader Joshua Wong and his girlfriend were assaulted on the city’s streets by an unknown assailant on Monday, ahead of a planned mass demonstration to mark the return of Hong Kong’s return to Chinese rule.

Wong, who rose to prominence during last year’s Occupy Central campaign for fully democratic elections, was punched by an unidentified man as he left a movie theater in the gritty downtown district of Mong Kok, just streets away from where he was arrested at the end of the mass civil disobedience movement.

The attack left Wong, 18, with visible injuries to his face, and also embroiled his girlfriend and fellow activist Tiffany Chin in the melee, after which Wong tried to catch and photograph their attacker.

“This man was about 20 years old … and crossed the road towards us, taking off his jacket and rolling up his sleeves as if getting ready for a fight,” Wong said. “He kept saying to me, ‘you wanna fight? you wanna fight?'”

“Then he pushed me and my girlfriend to the ground and kicked and punched us,” Wong said.

“I kept asking him why he was attacking me, and when I chased and caught up with him, he said he didn’t need a reason.”

Wong said he believed the attack would send a warning to any political figure in Hong Kong, where political divisions have deepened in the wake of the Occupy movement and the rejection of Beijing’s electoral reform package by the city’s legislature earlier this month.

“This incident should tell academic activists that if they are active in politics, they should pay close attention to their personal safety when they go out and about,” said Wong, whose group Scholarism was formed in opposition to a Beijing-approved “patriotic education” program in Hong Kong’s schools.

‘Not going to stop’

But Chin told RFA she had no plans to scale down her activism in the wake of the attack.

“I may stick to places where there are a lot of people and it’s brightly lit,” Chin said. “But I’m not going to stop social activism just because I got beaten up by somebody.”

“Otherwise, they would just be able to stop people opposing government policy and reduce the amount of activism in Hong Kong just by sending people to beat us up,” she said.

Both Wong and Chin have been prevented from entering mainland China since they took part in the Umbrella Movement, which rejected Beijing’s electoral reforms as “fake universal suffrage.”

The attack on the couple immediately drew comparisons with a series of attacks on prominent media personalities in Hong Kong, including a knife attack on former Chinese-language Ming Pao chief editor Kevin Lau, and a firebomb attack on the home of Next Media mogul Jimmy Lai.

Under the terms of its 1997 handover to China, the former British colony was promised the continuation of its existing freedoms and a “high degree of autonomy.”

But journalists and political commentators say Hong Kong’s formerly free press is seeing its “darkest days” yet in what is likely a harbinger of further erosion of the city’s traditional freedoms.

In a recent annual report, the Hong Kong Journalists’ Association (HKJA) pointed to a series of “grave attacks, both physical and otherwise in the past 12 months” that threatened freedom of expression in the territory.

Alan Leong, convenor of a pan-democratic lawmakers’ group in the Legislative Council (LegCo), said pan-democrats deplore any form of violence.

“Hong Kong values its freedom of expression deeply, and violence cannot be allowed into space where expression is free,” Leong told RFA.

“Violence is not the way. We need to use reason to convince our opponents,” he said.
For detail please visit here