for the martyrs of Tiananmen Square 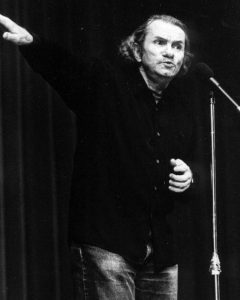 The first generals ordered
to clear the square
refused and said,

“The people’s army
should not be used
against the people.”

Oh, the old chain-smokers
had other cards to play,
and it ended the way it seemed
that those things always would,
when men and women dreamed
too soon, too well—
crunch of truncheons, smell of b1ood,
the bucket in the corner of the cell;
Masada and Spartacus,
Boston Massacre, Harper’s Ferry,
Warsaw ghetto,
Hungary, Prague,
Kent State, Soweto.
Some would add Calvary.This time they let 1t go too long.
The crowd was dispersed, the gas diffused.
But“The people’s army
should not be used
against the People. “

Once said, it could not be unspoken.
The beautiful princess had kissed the frog,
and the hard spell that held us was broken.
A monolith shattered, projecting its shards
like the plutonium bullet that ignites
the bomb. In-this chain, the Berlin Wall
collapsed in rubble and dust to the playing
of rock bands. The Soviet Union just gave up
and went away. Israel and Arafat shook hands
Mandela is President in South Africa.
And it won’t be over till the ripples wash back
even to Tiananmen Square.

“The people’s army
should not be used
against the people. “

In the front-page picture with that news, three students,
one a woman, stood atop a bus. The kid with
the headband was playing a guitar and singing—
what? Dylan? Perhaps Black Orpheus, summoning
up the sun of the new day. I wonder in what underworlds
he’s sojourned since, what sunless paths he’s followed;
how many seeds Persephone has swallowed.
Do they know what they started? Would they do
it over? Or, beaten, broken-hearted, next time
would they cut and run for cover? Perhaps they’ve learned
that anyone bringing fire to this ungracious race
should be prepared to be the first one burned.

But perhaps the scale of evil is diminished
forever. I think something is afoot out there,
and the monoliths will all be finished
when it’s played its part.
And from that day the most that we
will ever have to change will be
one human heart.

This entry was posted in June 4th Commemoration and tagged Jack McCarthy, ONE HUMAN HEART, Tiananmen. Bookmark the permalink.