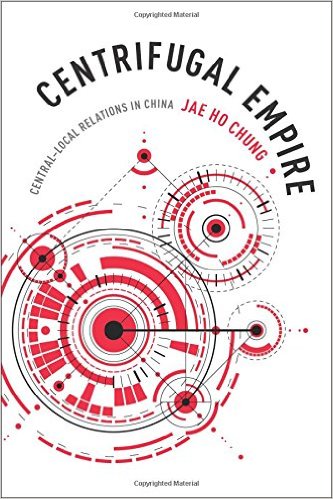 The dynamics between the central administration in imperial Chinese dynasties and local levels of administration since the first unification under the short lived Qin in 220 BCE and the ways in which the shadow of these persist to this day is an enormous subject. It is curious, as Jae Ho Chung points out in the preamble to this short but intense and highly rewarding monograph, why so little attention has been paid to this subject.

Perhaps the assumption is all too often that the Beijing central government gets everything it wants. That is the image one often sees from television footage of national leaders like Xi Jinping and Li Keqiang doing frequent inspection tours of the provinces. They are often shown handing out high-level instructions to attentive looking local officials, giving the impression that all Beijing has to do is utter something and it is immediately carried out across the country.

As Chung points out, however, the first clue to how erroneous this idea is comes from the simple fact that alone among large countries, China does not have a federal system, and has set itself rigorously against such a possibility over the last few years. Added to this is the fact that the country has varied between three, and four, levels of administration, from provincial down to country and town. This is one level more than, for instance, the US or Australia. All this complexity conceals one very obvious fact: that the bulk of policy instruments and fiscal powers are still controlled from Beijing, should it want to take these powers back under its wing. Even more important, the personnel decisions are as well.

That doesn’t mean that local autonomy is not often encouraged. Chung is excellent at pointing out just how disparate the approach has been even since 1978. From most decisions about economic planning, budgets, expenditure and outward investment being taken in Beijing, by the 1990s a huge amount of issues had been devolved. A surprisingly large number of local officials have been promoted to governors or party secretaries. But the challenges arising from this process of devolution were multiple: over-development of coastal provinces at the expense of the interior ones (something which had existed in reverse in the Maoist era where most revenue had been sent to Western regions), the creation of a tightly clan-controlled government structure at lower levels of the administration, and real issues with how local governments managed to fund themselves when the center withdrew—from land grab, rent seeking and the accrual of vast amounts of debt.

In the 2000s, there was a major rebalancing, and the center started to take back more controls. But the tension between the various levels of government exists to this day. Chung’s assessment is that while there are still challenges, what is remarkable is just how resilient and effective the system has been, and how much space there is between central diktat and local performance and interpretation which allows things to happen without the hindrance of remote bureaucratic control.

This is a short work, but one in which every sentence contributes something to the overall argument. A good example of this is the discussion of the role of the People’s Liberation Army (PLA) in which Chung points out that a central means of Party and central control has been to make Party military regions (of which there are six) simply answerable to different levels of government, in ways which see off any ability of the military to be able to create some kind of viable parallel political structure opposed to the Party.

There are, of course, other means by which the Communist Party maintains control. But its inventiveness in this mission is testified throughout this excellent and authoritative book—a must read for anyone who wishes to understand precisely how China works, and how it maintains it current unique governance structure.

Kerry Brown is Professor of Chinese Politics and Director of the Lau China Institute at King’s College, London. His most recent book is Hu Jintao: China’s Silent Ruler. For more writings see www.kerry-brown.co.uk.