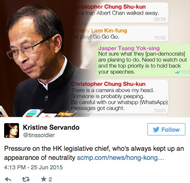 On the morning of June 18, the second day of a legislative debate over how Hong Kong would pick its next leader, Christopher Chung was at ease, even high-spirited.

“This is fun!” Mr. Chung, a member of the pro-Beijing Democratic Alliance for the Betterment and Progress of Hong Kong, wrote in a group chat among lawmakers on WhatsApp.

Jeffrey Lam, another Beijing-loyalist legislator, with the Business and Professionals Alliance for Hong Kong, was also in a light mood. He wrote, in English: “Let play! Go Go Go.”

By day’s end, the sentiments were considerably more somber.

Many Hong Kong legislators are avid users of the messaging app, often forming chat groups with their political allies to discuss everything from the drafting of news releases to filibustering tactics. The participants in this conversation were legislators who, like Mr. Chung and Mr. Lam, planned to vote for a Beijing-backed election rules bill that for the first time would have granted five million eligible voters in Hong Kong the right to cast ballots for their leader, the chief executive. But the fact that these voters’ choices under this plan would be restricted to two or three candidates approved by Beijing drove tens of thousands of people into the streets last year to protest what they called sham democracy.

The next message in the WhatsApp conversation came from a source that surprised many outsiders: Jasper Tsang, the president of the Legislative Council, who is supposed to serve as an impartial enforcer of house rules.

The messages, published by the Chinese-language newspaper Oriental Daily on Thursday, revealed that Mr. Tsang had helped Mr. Lam and other supporters of the election bill coordinate their efforts to speed up the timing of the vote, to avoid it taking place at night when more protesters were expected to gather outside.

“Don’t know their plan yet. Watch out,” Mr. Tsang wrote, referring to the pan-democratic legislators who had promised to vote against the bill. In another message, he said, “Must force ‘Tai Kao’ [Albert Chan, one of the opponents] to give his speech first.”

Mr. Chan said Mr. Tsang had “no other choice but to resign.”

“We expected and believed the Legislative Council president to be neutral,” Lee Cheuk-yan, another of the 28 legislators who voted against the bill, told reporters. “But it’s now obvious that we have elected someone who isn’t.”

In response to the outcry, Mr. Tsang explained that he was just trying to avoid having the voting take place at night, when protesters outside the legislature might grow rowdy. Therefore, he said, he advised legislators in the chat group to allow the bill’s opponents to speak first so that the bill’s supporters would have more control over the timing of the debate and vote.

“I believe it helps me moderate the meeting,” he told reporters. “I have not made any decision that is inconsistent with the principle of neutrality and fairness as the president of the Legislative Council.”

By Thursday evening, Mr. Tsang and another participant in the chat group, Tam Yiu-chung, had acknowledged having sent the messages. The newspaper that released the two sets of exchanges did not say how it had obtained them.

Besides raising questions about Mr. Tsang’s neutrality in the debate, the messages also reflected the mounting confusion among the pro-Beijing legislators as the day proceeded. Mr. Lam, who was so playful that morning, was to emerge from the Legislature Council dejected after a parliamentary maneuver he had initiated to buy time for a colleague who was arriving late went very wrong.