One Year On, Hong Kong Remembers The Umbrella Movement

Posted on 09/28/2015 by editor | One Year On, Hong Kong Remembers The Umbrella Movement已关闭评论 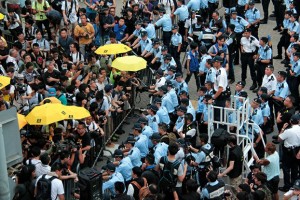 Hong Kong protesters commemorate the anniversary of the Occupy Central movement, Sept. 28, 2015.
RFA
One year after thousands of Hong Kong pro-democracy protesters used umbrellas to stave off pepper spray and tear gas in clashes with riot police, some 1,000 people rallied outside government headquarters in the semiautonomous city to mark the anniversary of last year’s 79-day Umbrella Movement.

The Occupy Central civil disobedience movement drew hundreds of thousands of people onto the streets of the former British colony at its height, although it failed to secure fully democratic elections in the face of a decree from China’s parliament, the National People’s Congress (NPC).

Protesters, who converged on central government offices holding the now-iconic yellow umbrellas to mark the firing of the first tear gas canister a year ago, were vastly outnumbered by police.

Some held aloft placards showing the city’s leader, the deeply unpopular chief executive Leung Chun-ying, as the devil, while others traded insults with small groups of pro-Beijing protesters on the sidelines.

“In the 79 days of the Occupy Central movement of 2014, we saw the power of the Umbrella Movement, and we saw the unity of the Hong Kong people in their continuing fight for democracy,” Occupy Central co-founder Benny Tai told reporters.

“The next time the central government refuses to allow genuine democracy for Hong Kong people, I’m sure they will come out onto the streets again,” he said.

Movement co-founder Chu Yiu-ming called on the crowd to keep up the fight.

“Every generation has to fight for human rights, democracy, and the rule of law in their time,” Chu said. “We must give everything we have to protect our inalienable human rights.”

“Don’t despair, and never give up!” he told the crowd, who shouted back: “OK!”

Student leader Lester Shum told RFA he hoped that the gathering wouldn’t be the only event marking the Occupy movement, which was sparked by public anger at a directive from the NPC on Aug. 31, 2014.

“We will continue to work hard to expand Hong Kong’s democracy movement,” Shum said. “The time is ripe, and we have made all the necessary preparations.”

Fellow student leader Joshua Wong agreed. “I hope everyone will never forget our sense of grief, and that it will be rekindled,” he said.

Its founders say the Occupy movement, which failed to change Beijing’s mind about universal suffrage, succeeded by sparking a political awakening in the city, which was promised a high degree of autonomy under the terms of its 1997 handover to Chinese rule.

“Our goal in the whole movement starting from Occupy Central is to awaken the general public of Hong Kong to the importance of democracy,” Tai told Reuters. “I think that has been achieved much more than expected.”

Hong Kong political commentator Cindy Ng said the movement was a unique experience of unity for Hong Kong, and had boosted political awareness in all sectors of society.

“Now, Hong Kong people are far more likely to know about what is happening in Hong Kong.”

“In the past, people didn’t even know what was being debated in the Legislative Council, but since the Umbrella Movement last year, they have started to pay attention,” she said.

“Nowadays, you can hear people in restaurants talking about these things,” she said. “There is a much better atmosphere for debate now.”

But she said she didn’t see much momentum left in the pro-democracy movement itself.

“I haven’t seen it yet, because I think we still need to analyze and process the events of last year,” Ng said.

Hong Kong was promised a “high degree of autonomy” and a progression route to greater democracy under the terms of its 1997 return to Chinese rule, within the “one country, two systems” framework agreed between British and Chinese officials and enshrined in its mini-constitution, the Basic Law.

In June 2014, an unofficial referendum saw 400,000 people vote in favor of universal suffrage and public nominations, in spite of a central government white paper asserting that the city’s autonomy is subject to the will of Beijing.

But just two months later, the NPC published an approved reform plan allowing all of Hong Kong’s five million eligible voters to cast a ballot in the 2017 race for the next chief executive, but limiting the slate to candidates vetted by Beijing.

It was rejected by pan-democratic lawmakers and Occupy Central protesters as “fake universal suffrage,” because pan-democratic candidates were highly unlikely to be nominated.

Hong Kong lawmakers dealt a death blow to the reform package on June 18, in a humiliating defeat for Leung and Beijing.

Occupy protesters also highlighted fears that Hong Kong’s existing freedoms have been eroded in the 17 years since the handover, amid a series of violent attacks on the city’s once-outspoken media.
For detail please visit here