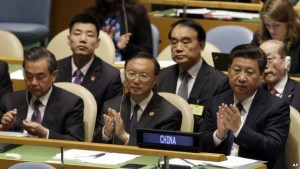 Chinese President Xi Jinping on Sunday addresses a United Nations conference on gender equality, an event which has drawn criticism because of his government’s policies that have been called the worst crackdown on rights in decades.

“I am not optimistic this kind of involvement by China’s top leader would bring changes for women activists on the ground,” said Frances Eve, a Hong Kong-based researcher with China Human Rights Defenders, an NGO. “The Chinese government takes no responsibility for imprisonment of activists expressing their distress at the condition of women in the country.”

In March, Chinese authorities detained five women who had staged a demonstration ahead of International Women’s Day, protesting sexual harassment on public transportation. They have since been released, but say they could still face charges.

Rights group Amnesty International says that since President Xi came to power in late 2012, authorities have carried out “unprecedented attacks on civil society,” curbing freedom of expression, detaining lawyers and other rights activists.

“As long as you don’t wear [rose] colored glasses and have an objective view, you will reach a fair conclusion about the important achievements women have made in China,” Foreign Ministry spokesman Hong Lei recently said.

Analysts say Beijing is likely trying to enhance its prestige in the area of human rights and could be setting the stage for exporting government-funded non-government organizations across the world.

Having officially-backed NGO’s in different parts of the world would enhance China’s political influence, analysts said.

Eve, researcher at CHRD, also questioned the United Nations’ decision to become a co-host in the conference, giving the impression that it approves of the reprisals on women activists in China.

“It is a slap on the face of women activists, who were detained to have their voices heard by the United Nations and the outside world,” she said. Such a move might prove to be discouraging for bold activists who take great risks to speak for the distress of unprivileged women.”
For detail please visit here