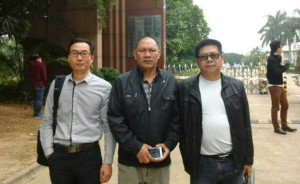 Authorities in the southern Chinese province of Guangdong are moving ahead with the subversion trial of women’s rights activist Su Changlan, who publicly supported Hong Kong’s Occupy Central
pro-democracy movement, her husband said on Thursday.

“My understanding is that it was submitted today, but I haven’t been able to get a meeting with [Su] yet,” Liu said. “We will have to wait until after the May 1 public holiday for that.”

A volunteer for the New York-based Women’s Rights in China group, Su was initially detained last October, but her lawyers have been refused permission to meet with her twice.

Liu said the transfer of Su’s case files to the procuratorate means that he should no longer need to seek official approval before visiting his client in detention.

“This applies, even in cases involving matters of state security,” Liu said. “So the detention center won’t have any excuse; they’ll have to arrange it within 48 hours of the request.”

“The fact that they have sent the case to the prosecutor means that the police think they have enough evidence to convict Su Changlan,” Liu said.

Meanwhile, Su’s husband Chen Dequan said his freedom-of-information lawsuit protesting a lack of information on his wife’s health was rejected by the Nanhai District People’s Court this week.

“They said that the information I requested didn’t lie in the public domain, so they wouldn’t make it public,” Chen said.

“They have taken my wife, and I don’t know whether she has been forced to make a confession.”

Chen said he is extremely concerned for Su’s health and safety after seeing the treatment meted out to fellow Guangdong political activist Li Biyun, who fell foul of the authorities after she tried to stand as
an independent candidate in elections to her district People’s Congress.

“There was already an incident here, when [Li Biyun] was in the detention center,” Chen said. “She was beaten up to the point where she couldn’t even walk.”

He added: “I will be appealing.”

Chen said Su is innocent of the charges against her.

This entry was posted in Hong Kong Democracy, Writers in Prison and tagged Su Changlan, Subversion. Bookmark the permalink.