As we come to the end of 2014, we can say that this year has brought a “hardening” (板结) of China’s political discourse. It’s been a year of cleansing in the ideological sphere, and we find now that virtually all of the terms related to political reform, ones we might previously have classified as “light blue” (浅蓝) — not part of the official Chinese Communist Party discourse but still tolerated — have entered the taboo zone of the “dark blue” (深蓝).

Meanwhile, the “light red” terms (浅红) favored by those in power have undergone a complete shake-up (全面重组). To top it all off, a number of “deep red” keywords associated with the Maoist pre-reform era have made a comeback. 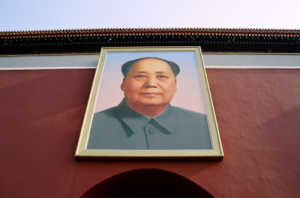 [ABOVE: China’s political discourse is at least as enigmatic today as it was in the era of Mao Zedong. Is China heading forward, or back?]

What follows is my 2014 Report on Political Keywords in China. Let us begin with the most troubled term of all, the embattled concept of “constitutionalism.”

The Term “Constitution” (宪) is Battered About in the Winds

The biggest discourse incident of 2014 was the disappearance for a time of a pair of phrases President Xi Jinping gave some degree of emphasis soon after becoming the General Secretary of the CCP. Those terms are: “ruling the nation in accord with the constitution” (依宪治国) and “governing in accord with the constitution” (依宪执政). The terms re-emerged in September this year, following many months of chilly in-fighting over constitutionalism and its relevance for China.
For detail please visit here

This entry was posted in Headlines and tagged Chinese politics, Qian Gang. Bookmark the permalink.