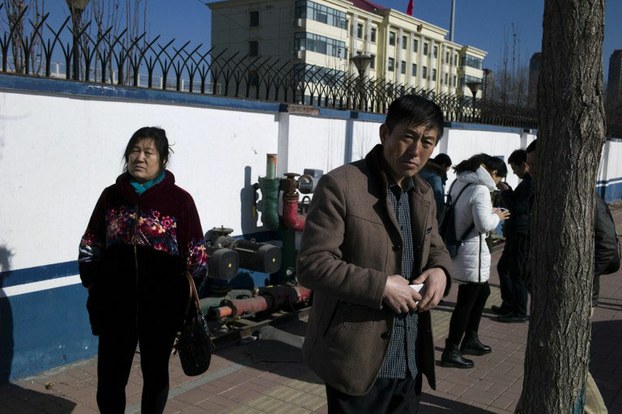 Family members and lawyers of detained lawyers and their colleagues gather after another attempt to seek answers about China’s biggest-ever crackdown on human rights lawyers in Tianjin, Jan. 8, 2016. AFP

Prominent rights activists and campaigners have called on democratic members of the United Nations to block China’s re-election on Friday for another two-year term on its Human Rights Council.The New York-based Human Rights Watch cited China as a current council member that has failed to live up to the terms of its pledges to the Council.

“The government of [President] Xi Jinping has overseen the most aggressive campaign against human rights since the 1989 Tiananmen Massacre,” the group said in a statement ahead of the vote.

“Beijing intimidates and punishes activists who seek to engage with U.N. human rights units, limits the ability of special rapporteurs to work in the country [and] provides woefully dishonest information in key reviews,” it said.

Beijing also rejects the idea of the universality of human rights, it said.

The group’s U.N. director Louis Charbonneau said only countries that are “truly committed” to improving human rights should be allowed to serve on the council.

“The UN Human Rights Council’s ability to successfully expose and hold violators to account is under threat because a number of countries use it to thwart attempts to expose their own crimes and abuses,” Charbonneau said.

Meanwhile, the Chinese Human Rights Defenders (CHRD) network, which compiles reports from various groups inside China, said Beijing has clearly broken its “voluntary pledge” to the council, and should be barred from renewing its seat.

“U.N. Member States should not vote to re-elect China to the Human Rights Council,” the group said in a statement.

“It is long overdue for the international community to send a strong message to the Chinese government that it is unacceptable to continue abusing human rights at home and weakening international human rights norms and mechanisms at the U.N.”

The group said China is overtly using its membership of the council to promote its own view of human rights, which has little to do with U.N. principles.

Since Beijing first joined the council in 2014, Xi’s administration has launched a nationwide crackdown on nongovernmental groups, activists, and rights lawyers, detaining more than 300 people nationwide and sentencing lawyers and other campaigners to jail on “subversion” charges.

“The crackdown on lawyers was very serious and it still hasn’t been resolved, with lawyers like Wang Bingzhang and Xie Yanyi [jailed] for representing clients and for speaking out against unfairness in the judicial system,” Henan rights lawyer Chang Boyang told RFA.

And a dissident who asked to be identified only by his surname Ma said the human rights situation is continuing to worsen.

“The crackdowns are continuing on members of the Falun Gong [spiritual movement], on civil rights movements among ordinary people, and on pro-democracy activists,” Ma said.

“Society may look peaceful and orderly on the face of it, but think how many police and military units they have watching us, reading to suppress any movement by the people,” he said.

The Chinese government’s own policy documents say the breakneck economic development the country has seen in the past three decades provide a “right to subsistence,” which it calls the “foremost human right.”

Meanwhile, Chinese officials routinely dismiss any criticism of its human rights record with warnings not to interfere in China’s “internal affairs.”

According to CHRD, the government has continued to ignore requests from international organizations for data and specific information, and has also failed to implement recommendations made after its review by U.N. groups working to prevent torture and to protect the rights of women and children.

Beijing has also failed to submit the last three reports to the U.N. committee on racial discrimination, it said.

China has yet to ratify international covenants protecting civil, political, and economic rights signed in 1998 ahead of Beijing’s bid for the 2000 Olympic Games.

CHRD said it had documented 2,236 cases of deprivation of liberty of human rights defenders from 2013-2015, including LGBT and women’s rights activists, health activists, and individuals commemorating the 25th anniversary of the 1989 Tiananmen Massacre.

“In tandem with these crackdowns, the government drafted or passed draconian legislation and policies to reinforce its tightening control over civil society,” it said, citing the National Security Law, the Law on the Management of Overseas NGO Activities Within China, the Charity Law, the 9th Amendment to the Criminal Law, and the Counter-Terrorism Law.

‘Stand up to China’

U.S.-based activist Yang Jianli, writing in The Washington Post, called on the world’s leading democracies to stand up to China.

“Today, many of the world’s leading democracies are afraid of China’s economic power,” Yang wrote in an opinion article. “So they make little or no effort to bilaterally press China on human rights issues.”

Yang said rights activist Cao Shunli died in police custody just four months after China was re-elected to the council, winning 176 votes out of 193 in November 2013.

“During its current three-year term as a member of the U.N. Human Rights Council, China has committed thousands of human rights violations,” he wrote.

“No reasonable person could possibly find any excuse to either overlook China’s recent horrific human rights record or to trust one more time China’s promises to be good in the future,” he said.

“Voting to put China on the council again would be like picking the fox to guard the henhouse—while he was still wiping the feathers off his mouth from his last meal.”

Reported by Yang Fan for RFA’s Mandarin Service, and by the Cantonese Service. Translated and written in English by Luisetta Mudie.