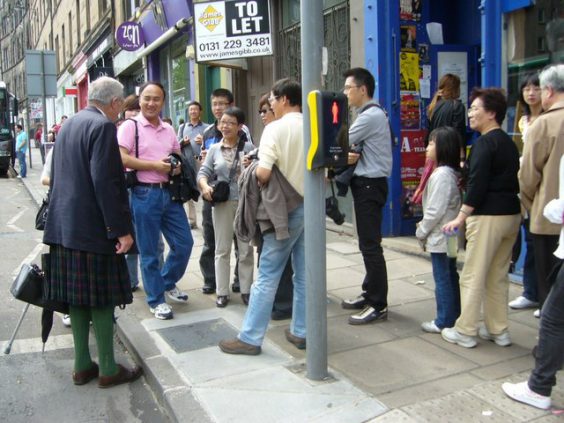 Although insulting, Chen Pokong’s book is accurate in portraying a China that indulges in capitalistic consumption.

The Unwelcome Chinese is a title of a book by the popular writer and respected political commentator in American-Chinese media (VOA, RFA) Chen Pokong. It sounds quite rude and not inviting. According to the official language, it “hurts the feelings of the Chinese people.” It is true – China became a powerful country in an economic and political sense, and nowadays, its citizens can afford to travel around the world. Yet the tourists from Mainland China are a somewhat special species – they are often too loud, impolite, and behave themselves in an uncivilized manner (e.g. noisy, restless, ignore the rules, jump the queue, cross the street on red, litter, urinate in a public place, quarrel and scuffle easily, etc.). They surge into luxurious shops and come out with huge bags as if conducting their daily grocery shopping. This is, of course, a superficial description of the contemporary Chinese, who get rid of poverty and became well off within a short time. The totalitarian system under communism has destroyed the old tradition, moral and ethics; the people fall from the extreme ideological dialectical materialism to the opposite side of a money worshipping mentality after Deng Xiaoping’s reform in the 1980s. The polarization between nihilistic idealism and secular, common consumption turn the Chinese people into an ordinary vulgar mass.

Chen Pokong is not the first writer to criticize the national characteristics of his compatriots; the writer Lin Yutang (1895-1976), who had great influence on the Western world in the 1930s and 1940s, already pointed out the weaknesses of the Chinese in his My Country and My People (1935): extreme endurance (to suppression or injustice), indiscipline (ignorant to laws or rules, if there are any), cunningness (a special technique to survive). His contemporary colleague Lu Xun (1881-1936) also vividly drew the picture of a typical Chinese peasant. In his novel The True Story of Ah Q (1921), the protagonist Ah Q is a homeless rogue on the countryside, a coward, but cunning. He bullies the less privileged but kneels down to the powerful. He endures all the humiliation and suppression by persuading himself that he is spiritually “superior.” Lu Xun used the sarcastic irony of Ah Q to expose the Chinese national mentality. These two masters have held a mirror in front of their countrymen. Now, almost a century later, the Chinese are even worse in their mental status and social behavior due to decades of brainwashing and indoctrination through the communist ruling.

Tracing back through history, Chen Pokong has found that the pride and dignity of the Chinese was torn down the first time through Genghis Khan, the Mongolian who conquered China and whose dynasty ruled for almost hundred years. The second time was the Qing dynasty (1644-1912), where the Manchus ruled China for over 268 years. These were foreign invaders. Their suppression of Han people was severe; they broke the spine of the Chinese. As colonial subjects, the Chinese adopted the obedient slave mentality to survive. The third time that the Chinese lost their ego was when the communists took over power in 1949. With its constant political campaigns from 1949 till today, the totalitarian regime destroyed the soul and conscience of the Chinese people. Chen explains that that’s why people in Hong Kong and Taiwan are much more civilized, kind and “normal,” because they have not experienced the cruelty of political purges, because their human nature has not been crushed under a vicious system.

Lying and cheating is a part of the Chinese culture. The government-controlled media is practicing these tricks daily. Contaminated food, poisonous baby formula, and fake medicine and wine are all evidence of this sick culture. The corrupted officers grab the money and move abroad with families. Rich parents send their children to foreign countries. Those who can afford to pay a high price for imported food; they do not trust any “Made in China” goods. Besides all these, the author Chen points out another important thought about his countrymen and women: extreme fear of death. A Chinese sentence reflects clearly this philosophy: “even a miserable life is better than a good death.” Historically, many emperors tried to find out the secret of everlasting life. The most famous one is the first emperor, Qin (260-210BC), who sent out hundreds of virgin boys and maids to the sea to search for the elixir of immortality. “Live, even like an animal or dog, but live.” This becomes almost a motto for contemporary Chinese people because life was indeed hard in the past. During the Cultural Revolution or the other political movements, if one survives, it means he or she wins. Chen cited the Karamay fire in Xijiang autonomous region on December 8, 1994. When the fire broke out in a theater building, around 1,000 teachers and students and government officers were there. An officer holding a microphone gave an order: “Children, listen, don’t move, don’t panic, let the officials walk out first.” The result was that all the cadres survived and 325, including 288 schoolchildren, were killed. In comparison, Chen mention the sinking of the RMS Titanic in April 15, 1912, where the survivors were mostly children, women, and sick people, because the strong, rich people offered their chance to the weak. Chen sums up: “Ugly nation leaves ugly story, criminal country leaves criminal record.” (p. 160)

The author Chen was born in 1963. His father, a teacher, was inhumanely tortured during the Cultural Revolution. His mother, a physician, died at young age because of sorrow and fear. Chen grew up in a chaotic time of political persecution and ideological fanaticism. Nightmares obsessed him throughout his childhood and early adulthood. As a diligent and talented student, he ended up in prison for three years because of his engagement in the protest movement in Guangzhou in 1989. After his release, he tried to escape to Hong Kong, and ended up again in reeducation camp for two more years. When he finally arrived in the U.S. in 1996, he understood that at 33, his new life was beginning. Today, he is a successful writer, a leader in opinions, principal of a business school, and a happy father. With all the critics, he still believes that when one day China becomes a democratic, free country, there is hope that all the ugliness of the Chinese characteristics can be changed with time.