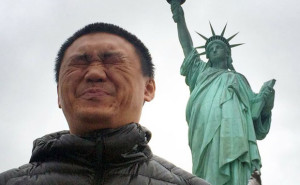 Shanghai artist Dai Jianyong demonstrates the ‘Chrysanthemum Face’ in an undated photo.
Photo courtesy of Dai Jianyong
Authorities in Shanghai are holding an outspoken artist and street photographer after he posted satirical images of China’s president online, his lawyer told RFA, amid concerns that a permanent change is taking place in the level of state control over individual expression.

Artist Dai Jianyong was held under criminal detention by the Changning district police on Wednesday, on suspicion of “picking quarrels and stirring up trouble,” according to a copy of his detention warrant seen by RFA.

Dai had recently widely published a digitally altered photograph of Xi with a puckered up facial expression and large mustache on T-shirts and soda cans.

An officer who answered the phone at the Changning district police department declined to comment on Dai’s case, however.

“If you want to find out about this, you’ll have to come here and inquire, with your ID card,” the officer said.

“We don’t have a telephone inquiry service here, and we don’t answer external queries, sorry.”

However, Beijing-based rights lawyer Liu Xiaoyuan confirmed the detention after speaking with Dai’s wife on Wednesday.

“[The charges are] picking quarrels and stirring up trouble,” Liu said. “His relatives will probably hire a lawyer locally to meet with him.”

“To judge from what his wife said, it looks as if a meeting can’t happen until Monday.”

The inclusion of the mustache has led some to speculate that Dai intended a resemblance to Adolf Hitler, although the mustache lacks the narrow, boxy appearance of Hitler’s facial hair.

Online activists in China have made the link in the past, by substituting the first character in the Chinese transliteration of “Hitler,” Xi Tele, for Xi’s actual surname.

According to the Shanghaiist blog, the puckered-up expression is known to Dai’s followers as “chrysanthemum” face, an Internet slang reference to the anus.

“The fact that Xi is making a similarly unflattering ‘anus face’ in the offending image certainly isn’t helping the matter,” the blog commented.

Dai’s friend and fellow artist Wu Tun said the police reaction was “too much.”

“He’s a photographer and he usually shoots a lot of different things,” Wu told RFA. “He did a satirical portrait of Xi Jinping, merging his own face with Xi’s in Photoshop.”