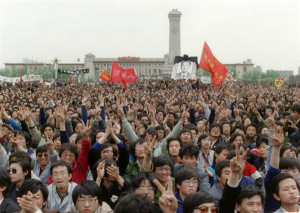 Students gather at Tiananmen Square in Beijing, April 22, 1989.
AFP
The ruling Chinese Communist Party’s propaganda department has ordered the country’s tightly controlled online media to delete an editorial hitting back at a recent open letter from overseas Chinese students to their counterparts in Chinese universities detailing the 1989 military crackdown on the student-led Tiananmen Square democracy movement.

The May 26 editorial ran in both Chinese and English versions of the Global Times tabloid, which has close ties to party mouthpiece the People’s Daily, and said the letter showed that “hostile overseas forces” are trying to turn Chinese people in their 20s and 30s against the party.

The letter, authored in early May by U.S.-based Chinese student Gu Yi and signed by 10 other named overseas Chinese students, calls on Beijing to allow greater transparency around the events of June 3-4, 1989, when the People’s Liberation Army (PLA) deployed troops with tanks and machine guns to clear democracy protesters who had paralyzed central Beijing for several weeks.

“Twenty-six years ago on June 4, a group of young students like us in the full bloom of their youth, who harbored a precious dream for their country, were mown down in the streets of Beijing by the guns of the people’s army,” the letter said.

“This piece of history has been so extensively deleted and carefully edited, that people of our age group know very little about it.”

The letter goes on to detail some of the events of the night of June 3, 1989, when long columns of PLA tanks thundered down the major boulevards of the city, firing on protesters and bystanders, and crushing students.

It hits out at the official government verdict of the crackdown as a necessary response to rebellion, saying that the problems of corruption and close ties between government and business highlighted in 1989 have become far worse today, while anyone who tries to speak out about the massacre is sent to jail.

“Not only has the Chinese Communist Party not published reliable figures about the number of deaths and injuries in this crucial historical event; it has described it as ‘putting down a counterrevolutionary riot,’ or ‘political turmoil,'” the letter said.

“It has deliberately set out to erase people’s memories [of the event] … and June 4 is a date so sensitive that nobody can talk about it,” it said.

The letter doesn’t call for a reappraisal of the crackdown, but for the perpetrators—”this murderous regime”—to be brought to justice.

“We do not forgive or forget, until the continuing persecution is halted and justice is done,” the letter says.

The Global Times’ English version of the editorial, which was still available online on Wednesday, said the letter was “insulting,” and recalled the rhetoric of earlier pro-democracy activists.