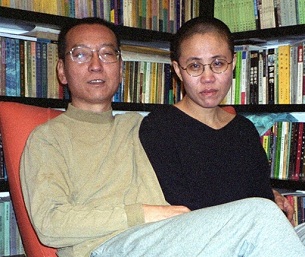 Six years after winning the 2010 Nobel Peace Prize, jailed Chinese dissident Liu Xiaobo looks unlikely to be given the chance to ‘seek medical parole’ overseas like high-profile dissidents have done before him, a close associate told RFA.

Liu, 60, is unlikely to qualify for parole, because he has never admitted to committing any crime.

And since his Nobel prize was announced in 2010 to the fury of Beijing, Liu’s wife Liu Xia has remained under strict house arrest and close police surveillance at the couple’s home, denied contact with friends and fellow activists.

“Liu Xia still visits Liu Xiaobo regularly, once a month, but in reality, we are in a situation of stalemate,” Beijing-based activist Hu Jia, a close friend of the Lius, told RFA on Friday.

Hu’s own contact with Liu Xia has been severely limited since her brother Liu Hui, jailed for 11 years for “bribery” charges in 2013, was released on bail — with strict conditions attached.

Liu Xia has been warned that her brother could go back to jail if she has any contact with the outside world, including fellow rights activists, foreign diplomats or journalists, Hu said.

Hu said he is now unable even to have a shouted conversation with Liu Xia from outside her window, because Liu Hui is effectively being held hostage to ensure Liu Xia remains silent.

“Her cutting off of ties with [fellow activists] has now become a huge obstacle to our involvement and a lot of effort we could put in on her behalf,” he said.

Hu said he believes Liu Xiaobo is also unlikely to accept any deals offered to him by the ruling Chinese Communist Party.

“For example, if he were to go into exile overseas, he would have his freedom and security, but his ability to have any impact on Chinese society would just fade away,” Hu said.

“The name of a Nobel laureate in itself sends a message,” Xu said. “It represents a whole group of people, ordinary Chinese people.”

“His prize is a symbol of the Chinese people’s love of human rights,” she said.

Hubei-based rights group Civil Rights and Livelihood Watch said in a recent statement that the Chinese authorities are increasingly targeting the relatives of dissidents for persecution.

Founder and spokesman Liu Feiyue said “guilt by association” is becoming more and more common as the government seeks to stamp out any hint of public opposition or dissenting opinions.

“The harassment, threatening and terrorizing of family members is a particularly evil example of human rights violations,” Liu said. “It is an evil that goes further than what is humanly acceptable.”

“Added to that is the fact that the authorities are using these evil tactics more and more frequently, and in more and more serious ways,” he said.

Reported by Goh Fung for RFA’s Cantonese service, and by Yang Fan for the Mandarin Service. Translated and written in English by Luisetta Mudie.