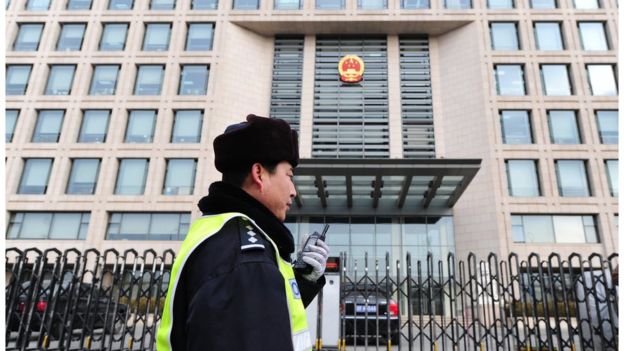 As close as many people would get to being inside a court – until the website was launched. AFP

Within China’s notoriously flawed legal system somebody is actually trying to usher in a bit of transparency. Now you can boot up your laptop or turn on your smartphone and take a peek inside proceedings.You might spot two people trying to secure an investigation into faulty tyre pressure-measuring equipment, and there is Chinese tech giant Tencent taking on the Ministry of Commerce over a copyright ruling. Divorce, robbery, murder and drug trafficking are all on display.

These are trials being streamed via the new website tingshen.court.gov.cn. Some live, some pre-recorded.

You can move your cursor over a map of China and each province lights up. In a sidebar the various courthouses appear with the number of hearings broadcast so far.

There are split screens revealing different perspectives – of defendants, judges and lawyers. Some trials can also be played back well after the original appearance date.

A normal Chinese trial may not be officially described as being “closed” but that does not mean a member of the public can just walk in. Each court has a different system of deciding who to let in and who to deny. Sometimes family members are not even permitted to sit inside.

In a country where a reporter seeking information on a trial can feel like they’re banging their head against a brick wall, this new site is all a bit sophisticated and, well, open.

Make no mistake, this does not mean every trial will appear. Controversial political cases will remain remain buried so far from a live-streaming website that they might as well be taking place in an underground nuclear shelter.

However there is a wealth of interesting material that is being shown.

Take the example of the person suing one of Beijing’s district governments in an attempt to force the release of information relating to how much locals have been offered in compensation for the demolition of their houses. This is a red hot subject right across China.

If somebody can find out what seems to be a just price for their family being forced out of their home they can try and make developers pay them that money. Construction companies and corrupt government officials have been keen to keep these payments secret so they can pay as little as possible to flatten a dwelling and move the inhabitants off to the outskirts of the city.

According to Zhou Qiang, the head of China’s Supreme People’s Court, the streaming site will “better safeguard people’s right to know and supervise” but its value could go well beyond that, by helping Chinese citizens get a glimpse of what’s actually going on inside their country, beyond the filter of state-controlled media.

It’s also going to help people learn how the legal system operates here and it won’t take enthusiastic observers long to work out that the defendant almost always loses. 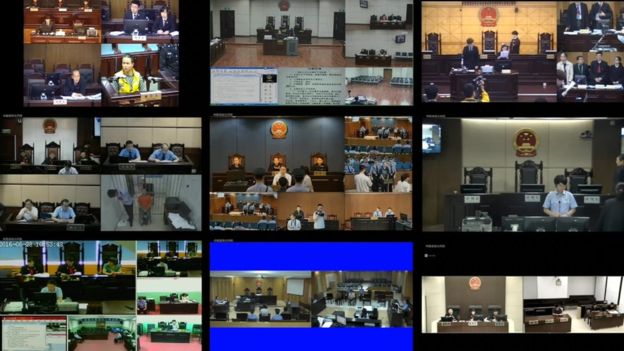 Lawyer Lu Miaoqin has worked on high-profile cases, including that of a woman who said she was sacked because she was a lesbian. She says she welcomes the streaming site because it “requires lawyers to be more professional and perform better in court”.

But others are more concerned. Human rights lawyer Liang Xiaojun told the BBC “I don’t think it’s appropriate to broadcast trials online because many people involved in these cases probably don’t want the public to share their personal information.”

Commercial Lawyer Zhang Yanfeng can see the good and bad in it.

“It’s making sure that justice isn’t corrupt and could prevent the manipulation of the trials,” he said. But added: “However, it may encroach on people’s privacy. For those young people who’ve committed only a petty crime, their wrongdoings are usually forgiven and forgotten easily yet now this is being made public.”

The extent to which this has been taken up appears to differ wildly from province to province. Jiangsu on the prosperous east coast to the north of Shanghai; or Guangdong, next to Hong Kong, are at the forefront. Tibet, Xinjiang and other remote or sensitive areas are yet to come online.

This could be simply a matter of time until the network is fully rolled out. Either way – in a nation where secrecy can feel like the norm and a lack of access and accountability is a way of life – this is a step in a different direction.

Most observers consider that, under Xi Jinping’s leadership, China is becoming more hardline. The rounding up and jailing of human rights lawyers and other activists in recent times has produced stark evidence that this thesis could be right.

And yet here we have a website moving against the tide.

This entry was posted in Headlines and tagged censorship, online, Stephen McDonell, trial. Bookmark the permalink.