Posted on 08/14/2015 by editor | Teasing Out Ai Weiwei’s Endgame, After China Lifts a Travel Ban已关闭评论 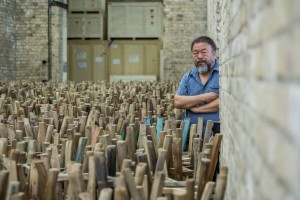 Ai Weiwei in his workshop in Berlin last week, among stools that were featured in his 2014 show “Evidence” at the Martin-Gropius-Bau exhibition hall.Credit Michael Kappeler/European Pressphoto Agency
‘‘Silence, exile and cunning’’ was James Joyce’s formula for the artist to survive in a treacherous world.

The Chinese artist Ai Weiwei seems to be trying something different.

For one thing, Mr. Ai doesn’t want exile, he told the Süddeutsche Zeitung newspaper in Germany, shortly after the Chinese authorities lifted the ban on his travel, and four years after he was first detained over his outspoken criticism of China’s human rights record. ‘‘They also promised me I could return, which was very important to me,’’ he told the paper.

Nor has he chosen silence. Newly freed from China, Mr. Ai, 57, has said things to German news media that have horrified his fans, who saw him as a voice of resistance to tyranny.

Yes, hundreds of lawyers and their assistants have been detained by the Chinese police since July 9, but they are being treated better than he was, Mr. Ai told the Süddeutsche Zeitung: ‘‘They are explaining to the detainees the accusations against them. The courts are deciding how to handle them. The authorities are no longer acting outside the law.’’

Yet lawyers’ families and rights groups say disappearances and other extralegal methods have been common in the recent sweep.

Despite this, Mr. Ai told Die Zeit, in an interview for its Thursday editions: ‘‘If you look at the bigger picture, any country or political system has to preserve its stability. Arresting a few people is not a big deal.’’

Mr. Ai even told the Süddeutsche Zeitung ‘‘There is a basis of trust’’ between him and the authorities now.

‘‘My life is about more than just resistance,’’ he told Die Zeit.

When Die Zeit asked Mr. Ai about his comments about the lawyers, he said, ‘‘I don’t have to talk about that again,’’ and threatened to throw out the reporters if they pursued the subject. At the time of publication, Mr. Ai had not responded to a request for an interview.

On Twitter, some of his 283,000 followers are asking: Did Mr. Ai gain a passport but lose his soul?

‘‘Ai Weiwei really was my idol,’’ another user tweeted. ‘‘Where will I find another idol?’’

Their hero has fallen. Or is he displaying cunning, Joyce’s third recommendation? Is he playing a game? Liu Xiaoyuan, a lawyer and friend of Mr. Ai, seemed to suggest that in an interview.

‘‘You can wonder what he really knows about the lawyers’ situation,’’ said Mr. Liu, whose law firm, Fengrui, was shut by the authorities in July. ‘‘But you can’t say you know if he’s really free to speak his mind.’’

Furthermore, speaking in support of the lawyers could be dangerous for everyone. ‘‘What would the impact be?’’ Mr. Liu asked.

Mr. Ai told the Süddeutsche Zeitung that the Chinese authorities were watching him in Germany, saying, ‘‘They are following exactly what I say and do.’’

Mr. Liu continued: ‘‘People want him to behave in a certain way. Isn’t that just like the Cultural Revolution? Attacking and criticizing and demanding that he apologize? People say he’s their hero. He never said he was their hero. Or their leader. He’s an artist.’’
For detail please visit here

This entry was posted in Headlines and tagged Ai Weiwei. Bookmark the permalink.