Posted on 12/04/2016 by editor | Tienchi Martin-Liao: Elegy of a Chinese Peasant Woman已关闭评论 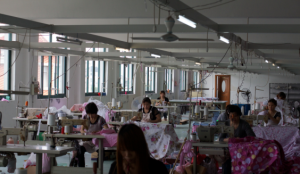 While their parents go to work in the cities, children in rural China are left behind and inherit generational poverty. Image via: Wikimedia Commons.

A tragedy in rural China highlights the socioeconomic divides that have left rural peasant women behind.

It is a gruesome story: a young peasant woman, Yang Gailan, in Gansu Province, killed her four children with poison and an ax, then poisoned herself. Her migrant worker husband returned home and, after burying the family, he committed suicide too. The tragedy happened in August and has stirred up a discussion about the bitter living conditions of Chinese women in the countryside.

The investigation showed that the reason of the death of the Yang family is “poverty.” According to the official “Poverty Reduction Program for Rural China,” a person is eligible for subsidy when he/she earns less than 117 yuan ($18 USD) monthly.

Ms. Yang’s husband worked in the city and sent $500 USD per year to the family, which disqualified her from applying for help.

We do not know why the couple had four children – in accordance with the rule, they had to pay the so-called “social compensation fee” for the “extra birth” because they broke the family planning policy, which allows one or two births only. It would be a huge sum of penalty. According to Professor Ai Xiaoming’s calculation, it costs 70 thousand and 140 thousand yuan, to receive the legal status of the “extra” two kids. Otherwise, these two would be illegal “black product” in the society – even their educational right would be deprived.

The tragic end of the Yangs shows the social-economic structure of rural China is out of balance, and has been for the last three decades. There were 277.5 million migrant rural workers in 2015.

Two-thirds of the population is male, one-third is female. This huge population leaves the countryside and works under miserable conditions in the factories or in construction sites of the booming cities, often without security measures. When they are injured, they will be fired; there is no medical insurance or compensation. Sometimes, they cannot even get the promised minimum wages.

In 2010, the series of suicides at the Taiwanese multinational electronic company shocked the world. Foxconn’s industrial park in Shenzhen reported 14 suicide cases within a year. Young male and female workers jumped from buildings. The abusive working conditions, overtime, low payment, failure to report accidents, etc., lead to this shocking record, although Foxconn when compared with other foreign companies in China is not the worst in treating the employees.

There were comments online saying that the pension for the dead, 100 thousand yuan/$14,459 USD, is too generous at Foxconn, so that among the workers, sayings like “One jump the whole family is guaranteed” and “Want to die? Die at Foxconn” were popular. Suicide did not stop in the following years, in the same company or in other industries; the tragedy continues. Most of the migrant workers still have their household registration in their original rural area, which means they cannot enjoy social services such as medical treatment and pension. Their children are also stamped as “peasant” even though their parents are working in the cities. It’s their legal inheritance; they are destined for citizens of second class.

To live or to die, the migrants’ life is in dismay. How is the situation of their families in the countryside? There are 60 million children left behind in rural areas. Sometimes both parents are gone.

There are millions of women like Ms. Yang, who give birth and raise the children, do all the farming work in the field, take care of the aged parents, etc. Should anyone in the family become ill, they cannot afford the medication or treatment. Death is always at the heel. Although most of the villages are empty of men, the patriarchal social structure is still overwhelming. Women have less to say, have to obey the men in the family, in the clan, or in the society. If a woman only gives birth to female babies, she will be looked down upon by others or abused by the parents-in-law.

However, to end the pathetic life is easy. Pesticide is in every household. It is the most common method of committing suicide on the countryside. When we look at the picture of Ms. Yang, a strong healthy young woman with red checks, no one would connect her with voluntary death. Yet she chose to mark a period in her life and took with her the four innocent kids, later followed by her poor husband. Her death is the strongest protest to the inhumane system in China. It breaks the myth of the economic success, and scorns the lie of Mao Zedong: “Women hold up half the sky.”