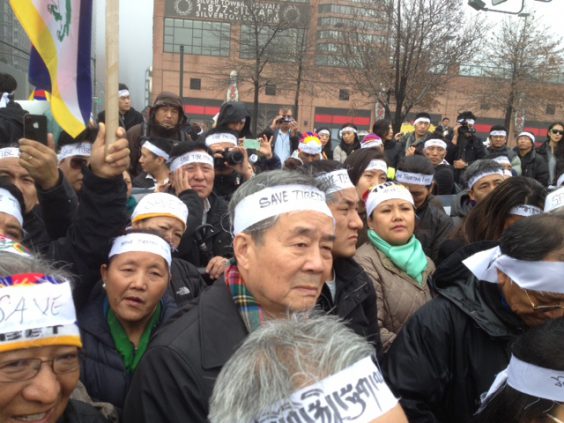 The obituary for Harry Wu’s recent death in Western media is full of compliments. He is called a human rights campaigner, a tireless fighter for freedom, a brave man who unmasked the inhumane forced labor camp system in China. Meanwhile overseas, Wu never enjoyed media fame; most of the Chinese do not have positive words for him.

For 10 years I worked with Harry Wu, leaving his Laogai Research Foundation in 2010 because our point of views differed so drastically. However, both of us worked on the same front to expose the violence of human rights abuses in China.

Harry Wu was a legendary figure, a true survivor. As a 22-year-old student, he was accused as a “rightist” and thrown in jail in 1959. During the following years he was in prison, his loving step-mother committed suicide, his younger brother was killed violently during the chaotic Cultural Revolution, an his father was also imprisoned. As Harry Wu suffered torture and starvation in prison, his siblings, intimidated by the state, also abandoned him. In the nearly two decades of his prison time, the family never wrote him a letter. His elderly brother visited him one time and warned him that he should reform himself to become a new communist human being. To die or to survive: that was the decision he faced. Wu survived in spite of the hunger, torture, solitary confinement, and hard physical labor in prison. Whoever survives Dante’s Inferno is not a common soul. Harry Wu forged himself into a man with strong nerves and an iron will. He lost all the valuable things in life – love, friendship, trust, honor and dignity – and the only maxim he followed was to survive and not be defeated. So he did, walking through death’s valley to become as cynical and cunning as a human soul could be.

Thank to his intelligence and diligence, when he finally came out of the prison, Wu could work as a lecturer of geology in Wuhan for some years. Then he grabbed an opportunity to come to the United States in 1985 and work as a part time scholar, supporting himself by being a bartender, a baker in a donut shop, a manager in a small factory. After the Tiananmen Massacre in 1989, he decided to devote his life to human rights issues in China.

In the ‘90s, China experienced an economic boom. Most of the labor camps had dual functions and transferred to productive entities. The prisoners worked as unpaid slaves. Harry never forgot his suffering in China and the 19 years he lost in prison. He wanted the justice in his way. He snuck into China several times and pretended to be an overseas businessman, who wanted to buy cheap products. This time, the gates of the labor camps and the affiliated factories opened for the honored guest. Wu filmed with hidden cameras on spot, where the prisoners working under dangerous and health damaging conditions in quarries, chemical factories, farms, and other ill-equipped facilities. Wu provided his film materials to an American TV station. In 1995, he was caught during one of his adventures at the northwest border. After receiving a sentence for 15 years, the Chinese authorities released him as a result of international pressure and then-First Lady Hillary Clinton’s negotiations. Harry Wu became a celebrity —his autobiographies were sold out in different languages.

Harry Wu was a beloved figure among some American politicians. They showed sympathy to his suffering under the Chinese dictatorship, praised his heroic deeds and his contribution to exposing the inhuman Laogai system in China. Thanks to his efforts, the word laogai, reform through labor, was included into Oxford dictionary parallel to Soviet gulag. Mr. Wu deserved respect. If only he was not lured in from unexpected, huge amounts of Yahoo money in his late years.

After a congressional hearing in November 2007, two Chinese dissidents were sentenced to 10 years because Yahoo handed their personal IP to the security police. Jerry Yang, the Yahoo CEO at that time, signed an agreement with Harry Wu, then the head of the Laogai Foundation. Wu’s company paid compensations to the two families and donated a huge amount money to build up a human rights fund, which was intended to help Chinese people who are persecuted because of their practice of freedom of expression. The sudden change has brought Harry Wu out of his concept. He did not know the line between “power” and responsibility. He did not accept advice, not to mention criticism. He handled business and reacted with instincts. One misstep followed another, and included not only the mismanagement of the fund, but plagiarism, and allegations of sexual assault eventually brought legal action against Wu himself.

Harry Wu was a complex figure. His personality contained both elements of the hero and the devil, transcendence and perfidy. His life was a tragic comedy. His death on April 27 threw shadows over the overseas democracy movement and will open another chapter of fighting among the different fractions.