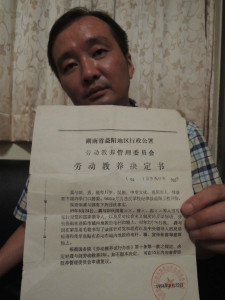 Chinese activist Gong Yujian displays a document from his 1994 imprisonment in undated photo.
RFA
A veteran Chinese dissident who served time in labor camp in the wake of the 1989 Tiananmen Square massacre has defected to Taiwan during a tourist visit to the democratic island.

Gong Yujian, who began a life of political activism after being heavily influenced by the 1989 pro-democracy movement in Beijing, said he had made the decision in a bid to escape constant harassment by the authorities and a nationwide crackdown on critics of the ruling Chinese Communist Party under President Xi Jinping.

Gong, who arrived in Taiwan on a tourist visa on July 22, said he had made the decision not to board his return flight with his fellow travelers on Aug. 6, instead applying for political refugee status with authorities in Taipei.

“People like me, who are the targets of persecution in China … live a life of the greatest possible suffering, and fear and pain,” Gong, who was sentenced to two years’ “re-education through labor” in 1994 for his support for the 1989 pro-democracy movement told RFA on Sunday.

“I was sentenced to counterrevolutionary crimes for the June 4 democracy movement, and that cast a long political shadow over the rest of my life,” he said. “I was left with a criminal record.”

“I knew that I would never get rid of it, never escape the fear, the harassment and the surveillance,” he said.

Gong said he didn’t tell anyone back home, not even closest family, that he was planning to defect.

“It was all my own private plan, from start to finish,” he said. “The whole situation in mainland China over the past couple of years has been an anti-corruption campaign in which corruption seems to get worse, ever tighter controls on thought and on the Internet.”

“I was continually targeted by the stability maintenance system, and my feeling is that all of this started in 2013,” Gong said, referring to the year that Xi Jinping was sworn in as president.

“Every time there was a politically sensitive date, like June 4, or the parliamentary session, when the U.S. first lady came visiting and asked to meet with people like us, which was the strangest,” he said.

Gong said that one of his aims in leaving China is to ensure that the military crackdown on the weeks-long student-led democracy movement in 1989 is never forgotten.

“There must be a reappraisal of June 4. The blood of June 4 can’t have been shed in vain,” he said.

“Mainland China should definitely implement democracy, because that’s the only way to really ensure its development, the only way that there is hope for world peace,” he said.
For detail please visit here