Beijing Bastard: Into the Wilds of a Changing China by Val Wang

Posted on 12/23/2014 by editor | Beijing Bastard: Into the Wilds of a Changing China by Val Wang已关闭评论 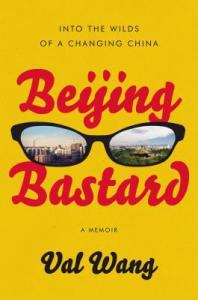 reviewed by Melanie Ho
18 December 2014 — American Val Wang goes “into the wilds of a changing China” in Beijing Bastard, a memoir of her time there in the late 1990s and early 2000s. A coming-of-age story that combines observations of Beijing with the culture clashes of West and East, Wang’s memoir gives readers insight into the city’s artistic subcultures, while exploring her own Chinese roots.

If Wang’s backstory feels familiar to readers, particularly those who have grown up in the West only to venture East as adults, it’s probably because hers is pretty typical. Wang’s parents fled China before 1949 and after a detour in Southeast Asia, settled in the suburbs of Washington, DC. Wang describes a childhood that included Sunday Chinese school “as regular as church”, performances in a Chinese dancing troupe and time spent with her grandparents. As a teenager she began to rebel:

The community I’d grown up in was stifling—everyone knew whose children went to Harvard and whose got pregnant, whose families were getting ahead in America and whose were falling behind. My successes or failures were theirs as well, and nothing was ever enough for them. It turned out we could be anything we wanted to be in life—as long as it was a doctor or a lawyer.

While her brother attended an Ivy League school and became a lawyer, Wang went to a liberal arts college and on a year abroad to Sweden, discovered the Chinese film Beijing Bastards.

Wang’s arrival in China shortly after college graduation speaks to the sort of culture clashes that one comes to expect with China memoirs. In Wang’s case, moving in with her relatives sets the stage for conflict, but it also demonstrates how Wang (and possibly others in similar situations) has a foot in each world.
For detail please visit here

This entry was posted in Book Reviews and tagged Beijing Bastard, Val Wang. Bookmark the permalink.