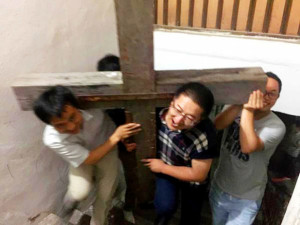 Authorities in the eastern Chinese province of Zhejiang have detained a top Beijing rights lawyer who was advising local Christians in their bid to resist the demolition of crosses from local churches.

Zhang Kai had recently been based in the coastal city of Wenzhou, known as “China’s Jerusalem,” to offer pro bono advice to more than 100 Protestant churches facing the removal of their crosses and the detention of pastors, lay preachers, and church members.

“They did it on the quiet, in the middle of the night,” a member of Xialing Church in Wenzhou told RFA on Wednesday. “They didn’t tell anybody in our church that this would happen.”

“By the time we got there, he had already been taken away.”

The church member said many people were concerned about Zhang’s fate.

“He was acting as adviser to more than 100 churches,” he said.

A second Protestant church member from the region said Zhang was detained at the same time as a group of preachers and pastors.

“They moved in simultaneously in different locations,” the church member said. “They took the preachers at the same time as Lawyer Zhang.”

A police officer who answered the phone at the nearby Lucheng district police department in Wenzhou declined to comment.

“I haven’t received any information about this,” the officer said.

Meanwhile, the head of the Xinqiao law firm in Beijing, Yang Xingquan, issued a statement on Wednesday condemning Zhang’s detention.

He said two legal assistants had been detained at the same time by the Wenzhou authorities, and called for their immediate release.

Yang said he planned to travel to Wenzhou in a bid to inquire after the detainees and to represent them.

And the wife of Zhang Chongzhu, a pastor from Wenzhou’s Pingyang county, said her husband had been taken away on Wednesday by state security police.

“He was taken away on a summons … at around 1.00 p.m.,” Zhang’s wife said, adding that no reason was given by officers who took him away.

Churches have waged widespread civil disobedience campaigns in the face of a cross demolition campaign launched by the ruling Chinese Communist Party in Zhejiang in recent months.