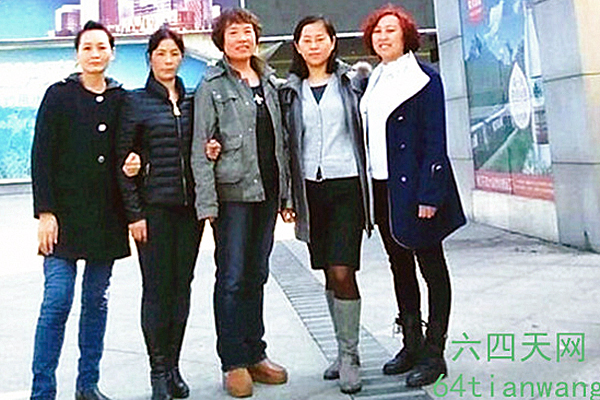 Chinese citizen journalist Wang Jing (2nd from R) denies charges that she posted reports about petitioners on the Sichuan-based rights website Tianwang and other sites, which caused a ‘serious disruption to public order.’ Photo courtesy of Tianwang

Authorities in the northeastern Chinese province of Jilin have indicted a citizen journalist who reported on the self-immolation of a petitioner on Beijing’s Tiananmen Square for “picking quarrels and stirring up trouble,” paving the way for a second trial at a district court, her lawyer said.

Wang Jing was initially detained in March 2014 by Beijing police after she posted reports and photos of a self-immolation protest on the first day of China’s annual meeting of the National People’s Congress (NPC).

She was tried last July, but while judges ruled that there was insufficient evidence to convict her, they stopped short of finding her not guilty.

Now, a district court in her home district of Chuanying has issued a fresh indictment against her, Wang’s lawyer Li Jinglin told RFA on Wednesday.

According to the indictment issued by the Chuanying District People’s Procuratorate, Wang is accused of posting reports to the Sichuan-based rights website Tianwang, Tencent Weibo and other sites regarding the activities of petitioners, which “caused serious disruption to public order.”

“They are pursuing her for spreading rumors online, but these are all excuses to shut her up,” Li said. “They are going after citizen journalists right now, and that’s what Wang is.”

Li said he planned to visit Wang, who denies the charges against her, at the police-run detention center where she is being held to discuss the details of the indictment, which paves the way for a trial.

Another of Wang’s lawyers has previously told RFA she was repeatedly tortured while in detention, causing her existing medical problems to worsen sharply.

Meanwhile, Wang’s mother said she is very concerned for her daughter’s health.

“Her health is very poor and she suffered from a brain tumor back in 1999,” she said. “She had surgery, including cranial surgery, on two occasions, and she was doing fine.”

“But since she was detained … her illness has come back. We have applied for her release on medical parole, but they won’t give it to us,” Wang’s mother said.

“When we request medical treatment at the detention center, they say there’s nothing wrong with her … but she has numbness on one side of her head and face since they [beat her up],” she said.

Another of Wang’s defense attorneys, Li Weida, said in a recent interview that Wang should have been released unconditionally after the court decided there was insufficient evidence to convict her in July.

“But the state prosecutor has sent the case back again with a request for further investigation, and it’s back with the police with a lot more in the files now related to the material facts of the case,” he said.

Tianwang founder Huang Qi, who is currently in detention himself, said in an interview on Feb. 9 that Wang was one of the best-known citizen journalists in China before her arrest.

“She reported on a number of cases in Jilin and quite a few big cases nationally, and she clearly angered the authorities,” said Huang, who was detained alongside three colleagues in Sichuan’s Mianyang city last Thursday after he went to investigate a land grab and speak to victims of the 2008 earthquake.

“She has refused to succumb to threats during her period in detention, and now they are cooking up fresh charges against her,” he said. “But they don’t stand up in law, because it’s not a crime for Wang Jing to post articles on Tianwang.”

The ruling Chinese Communist Party has passed a number of restrictive security laws in recent months that further limit freedom of expression in the name of protecting “national security,” Amnesty International said in its annual human rights report on Tuesday.

A proposed Foreign NGO Management Law, if enacted in the form presented for public consultation in May, would “severely restrict the rights to freedom of association, peaceful assembly and expression,” the group said in its State of the World 2015 report.

According to citizen journalist and rights website founder Liu Feiyue, several hundred people were detained and questioned under the new laws last year, including more than 300 human rights lawyers.

“This just shows how strongly the authorities are cracking down on human rights,” Liu said. “It’s much tougher than it was.”

“There are also other issues such as academic freedom and unofficial labor unions, all of which have become targets,” he said.

“We are extremely concerned about their situation right now,” Poon told RFA. “The report also mentions the authorities’ targeting of the culture and religious rights of ethnic minority groups, including Tibetans and Uyghurs.”

“There are a lot of people … who have been put on TV, confessing to their crimes since the beginning of last year,” he said, citing Hong Kong bookseller Gui Minhai as an example.

Reported by Ka Pa, Wong Lok-to and Hai Nan for RFA’s Cantonese Service, and by Qiao Long for the Mandarin Service. Translated and written in English by Luisetta Mudie.

This entry was posted in unclassified and tagged Jilin, Journalist, Wang Jing. Bookmark the permalink.