Posted on 11/29/2015 by editor | Guo Baosheng: Is Death Through Maltreatment Becoming Routine for Chinese Political Prisoners?已关闭评论 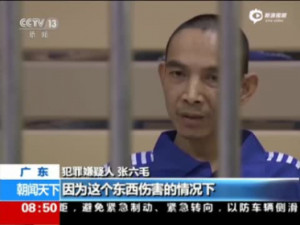 Guangzhou citizen Zhang Liumao (张六毛), who turned 43 this year, was put under criminal detention for “provoking a disturbance” on August 15, 2015. First he was locked up in Guangzhou’s Tianhe Detention Center, and then transferred to the city’s Number Three Detention Center. When his lawyer applied to meet with Zhang, he was refused on the grounds that Zhang was “anti-Party” and “anti-State.” Later his lawyer was forced to withdraw from the case. On November 3, the Number Three Detention Center called Zhang’s family to notify them that he had died. Then they put up all sorts of obstacles to prevent Zhang’s family members and lawyers from viewing his body. And once again, state media ran articles intended to smear Zhang Liumao and his friends before any trial had taken place, a clear sign that Zhang’s death should be considered suspicious. Numerous human rights activists who have rallied together after Zhang’s death have expressed the same fear: “Today it was Zhang Liumao, tomorrow it could be any one of us!”

[Zhang Liumao update: family and at least one lawyer viewed his body on November 16 and reported numerous wounds and traces of blood, evidence that Zhang was tortured in custody. Lawyers hope to see interrogation videos and family vows to lodge complaints. But these attempts to seek truth and justice will more likely than not be stonewalled in China. – The Editors]

Zhang Liumao is neither the first nor the last human rights activist or political prisoner in China to die from maltreatment suffered in custody. One can also point to the recent and widely known cases of Li Hong (力虹), Li Wangyang (李旺阳), and Cao Shunli (曹顺利).

Li Hong (Zhang Jianhong), born in 1958, had been sentenced to three years of re-education through labor for taking part in a protest by Ningbo writers and journalists in support of the student movement in Beijing in April 1989. On January 12, 2007, Li Hong was sentenced to six years in prison for “inciting subversion of state power.” He suffered maltreatment in prison, where he contracted a rare neurological disorder that caused serious atrophy of the muscles in his arms. The authorities refused numerous requests by his relatives to release him for medical treatment before finally granting medical parole in June 2010. By then, Li was fully paralyzed and died soon after at the age of 52.

Li Wangyang, born in 1950 in Shaoyang, Hunan, was one of the earliest members of China’s independent labor movement. In 1989 he was sentenced to 13 years in prison for “counterrevolutionary propaganda and incitement.” In 2001, he was again sentenced to 10 years in prison for subversion, resulting in 22 years total spent behind bars. On May 22, 2012, shortly after accepting an interview with a Hong Kong Cable TV reporter, his family discovered him dead from an apparent hanging at a Shaoyang hospital. Members of the public raised a number of doubts about the authorities’ claim that Li had committed suicide. All over the world—especially in Hong Kong—the “suicide” of Li Wangyang led to widespread protests and demonstrations.

Cao Shunli, born in 1961, was sentenced to a year of re-education through labor in 2008 for organizing a “Beijing Rights Defense Walk.” In 2010, just 16 days after her release, she was sentenced to another 15 months of re-education through labor to prevent her from protesting at the Shanghai Expo. Then, on September 14, 2013, Cao Shunli was detained at the Beijing Airport while on her way to Geneva for human rights training at the United Nations. At the detention center, her health worsened, but the authorities refused her timely medical treatment. She was taken to a hospital for emergency treatment after losing consciousness on February 19, 2014, and died less than a month later, on March 14.

Zhang Liumao, Li Hong, Li Wangyang, and Cao Shunli—this is just the tip of the iceberg for political prisoners and human rights activists who have died after being mistreated in places of incarceration. If you count human rights activists from Xinjiang, Inner Mongolia, or Tibet (where, for example, the well-known monk Tenzin Delek Rinpoche died in July 2015 under mysterious circumstances after 13 years in prison) or individuals imprisoned for their belief in Falun Gong or Christianity, the number of people who have died from mistreatment in places of incarceration is truly staggering.

In addition to the steady rise in cases of political prisoners who have been mistreated to the point of death in recent years, there has also been a sharp increase in the use of torture, abuse, and humiliation of political prisoners in places of detention. As the recently released Zhao Changqing (赵常青) put it: “Conditions in prison are extremely bad. I can tell you that the amount of suffering I endured this last time was far more than during all of my previous jailings combined.”

Human rights organizations have reported comprehensively on the maltreatment of political prisoners. For the moment, let’s just consider the example of yard time. Yard time is a basic right of all prisoners, but lately many political prisoners have been denied this right. Ever since his detention on August 8, 2013, Chinese democracy activist Guo Feixiong (郭飞雄, also known by his original name, Yang Maodong [杨茂东]) has been locked up in Guangzhou’s Tianhe Detention Center for more than two years without being given yard time. Numerous protests by his lawyers have had no effect. His lawyer has reported that, during their most recent meeting, Guo Feixiong’s memory, speech, and cognitive ability all showed signs of impairment.

Another Guangzhou activist named Liu Yuandong (刘远东) was detained on February 23, 2013. On August 19, 2015, his lawyer reported that Liu had been locked up for more than two years without any yard time. He hadn’t once seen the sunlight, and was locked up together with so many other people in a packed cell that he began to suffer intestinal disorders and skin disease.

Lawyer Tang Jingling (唐荆陵), chief organizer and activist in the Chinese Citizens’ Non-Cooperation Movement (公民不合作运动), has been in jail ever since being put under criminal detention on May 16, 2014. Books and letters sent to him have all been confiscated and returned by the Guangzhou Number One Detention Center. For over a year since their arrest, Tang Jingling and fellow political prisoners Yuan Xinting (袁新亭) and Wang Qingying (王清营) haven’t been granted any yard time. Instead, they have been forced to work, including night shifts. They’re locked up in a 20 m2 cell with 20–30 other detainees. They are humiliated by their cellmates and guards and forced to wear shackles on their hands and feet.

I was detained in the Shenzhen Detention Center for 3-1/2 years in late 1990s. Each cell in that detention center has a metal gate, outside of which is a small exercise yard surrounded by walls on three sides and iron bars high above. Usually, yard time would be from 10 a.m. to 5 p.m. This was the time when detainees were the happiest. We were always given yard time except when it was raining or when the guards decided to punish the whole cell for something. As we went out in the yard to walk around, breathe in fresh air, and look up at the sky beyond the metal bars above, we felt a bit more carefree. When they didn’t let you out for a day, you felt you were going to die of suffocation.

Between 1993 and 1999, I was locked up in four different detention centers from Beijing to Shenzhen. In my experience, the guards in those places showed a bit of respect to political prisoners—perhaps because they weren’t the hooligans and thieves they were used to dealing with. Some guards even believed that political prisoners had been detained in pursuit of social justice, something that was worthy of respect. Guards with college education even enjoyed passing the time by chatting with political prisoners.

Human rights activists around the world have expressed great anger and concern about the Chinese authorities’ refusal to grant political prisoners like Guo Feixiong, Liu Yuandong, Tang Jingling, Yuan Xinting, and Wang Qingying their right to yard time. They consider this to be a classic case of discriminatory repression and abuse of political prisoners compared to others, a form of deliberate cruelty and slow murder. The violence of the Chinese communist authorities toward human rights activists who have become political prisoners must be exposed, condemned, and stopped by the global forces of justice, otherwise the regime will become even more brutal in its abuse and maltreatment of political prisoners—until these practices become routine, if they haven’t already.

郭宝胜Guo Baosheng (郭宝胜) is a U. S.–based commentator on Chinese current affairs and religious issues. A participant in the June 4th movement in 1989 and one of the earliest organizers of workers’ rights in the 1990s, he was sentenced to three and half years in prison on subversion charges.
For detail please visit here