Officials had also ordered other monasteries and a private school in the area not to teach the language to laypeople. And public schools had dropped true bilingual education in Chinese and Tibetan, teaching Tibetan only in a single class, like a foreign language, if they taught it at all.

“This directly harms the culture of Tibetans,” said Mr. Tashi, 30, a shopkeeper who is trying to file a lawsuit to compel the authorities to provide more Tibetan education. “Our people’s culture is fading and being wiped out.”

China has sharply scaled back, and restricted, the teaching of languages spoken by ethnic minorities in its vast western regions in recent years, promoting instruction in Chinese instead as part of a broad push to encourage the assimilation of Tibetans, Uighurs and other ethnic minorities into the dominant ethnic Han culture.

The Education Ministry says a goal is to “make sure that minority students master and use the basic common language.” And some parents have welcomed the new emphasis on teaching Chinese because they believe it will better prepare their children to compete for jobs in the Chinese economy and for places at Chinese universities.

But the new measures have also stirred anxiety and fueled resentment, with residents like Mr. Tashi arguing that they threaten the survival of ethnic identities and traditions already under pressure by migration, economic change and the repressive policies of a government fearful of ethnic separatism.

The shift away from teaching Tibetan has been especially contentious. It is most noticeable outside central Tibet, in places like Yushu, about 420 miles northeast of Lhasa, in Qinghai Province.

Many schools in these areas — home to nearly 60 percent of China’s Tibetan population — had taught mainly in the Tibetan language for decades, especially in the countryside. Chinese was taught too, but sometimes not until later grades.

“This is why almost all innovation in Tibetan literature, film, poetry and so forth, plus a great deal of academic writing, since the 1980s has come from Qinghai,” said Robbie J. Barnett, a historian of Tibet at Columbia University.

But in 2012, officials in Qinghai and neighboring Gansu Province introduced a teaching system that all but eliminated Tibetan as a language of instruction in primary and secondary schools. They had backed off a similar plan in 2010 because of protests by students and teachers across Qinghai and Gansu, and even in Beijing.

Schools were ordered to use Chinese as the main language of instruction, which led to layoffs of Tibetan teachers with weak Chinese-language skills. And new Chinese-language textbooks were adopted that critics said lacked detailed material on Tibetan history or culture.

In March 2012, a student in Gansu, Tsering Kyi, 20, set fire to herself and died after her high school changed its main language to Chinese, her relatives said. She is one of more than 140 Tibetans who since 2009 have self-immolated in political protest.

This month, a petition circulated on WeChat, the Chinese messaging app, calling on officials to open a Tibetan-language primary school in Qinghai’s provincial capital, Xining, which has had no such schools under Communist rule.

“Letting 30,000 Tibetan children learn their mother tongue so they can carry on their own traditional culture is a very important matter,” said the petition, which got more than 61,000 signatures before censors blocked it.

But Tibetan attitudes are complicated by the practical reality of living in a country where the Chinese language is dominant, and where parents and children sometimes prefer English as a second language of education, not a minority language. Some Tibetan parents worry that their native language and culture are dying but nevertheless tell their children to prioritize Chinese studies, in part because the national university entrance exam is administered only in Chinese.

“The parents think that Chinese is most important for their children’s future,” said Phuntsok, a monk at a Yushu monastery told by officials to close its Tibetan classes this year.

Tsering Woeser, a Tibetan writer in Beijing, said that when she lived last year in Lhasa, she stayed by a kindergarten that promoted bilingual education. She could hear the children reading aloud and singing songs every day — in Chinese only.

“A lot of Tibetan people realize this is a problem, and they know they need to protect their language,” said Ms. Woeser, who studied Tibetan on her own after years of schooling in Chinese. She and others estimate that the literacy rate in Tibetan among Tibetans in China has fallen well below 20 percent, and continues to decline. 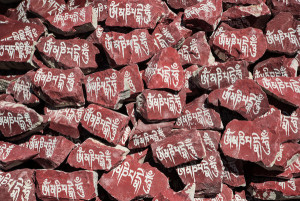 Stones engraved with Tibetan script. Monasteries have been ordered not to teach the language to laypeople. Credit Gilles Sabrie for The New York Times
The only thing that will stave off the extinction of Tibetan and other minority languages is allowing ethnic regions in China more self-governance, which would create an environment for the languages to be used in government, business and schools, Ms. Woeser said. “This is all a consequence of ethnic minorities not enjoying real autonomy,” she said.

The Chinese Constitution promises autonomy in ethnic regions and says local governments there should use the languages in common use. In 1987, the Tibetan Autonomous Region, which encompasses central Tibet, published more explicit regulations calling for Tibetan to be the main language in schools, government offices and shops.

But those regulations were eliminated in 2002. These days, across Tibetan areas, official affairs are conducted mostly in Chinese, and it is common to see banners promoting the use of Chinese.

Such efforts are in part a response to the Tibetan uprising in 2008, when anti-government rioting broke out in Lhasa and spread across the plateau.

Monasteries have long served as educational institutions in Tibetan society, with monks and nuns among the elite few who could read and write before Tibet came under Chinese Communist rule in 1951. Until recently, many monasteries held classes on the written language for ordinary people, and monks often gave lessons while traveling.

But over the past two years, officials in many parts of the plateau have ordered monasteries to end the classes, though Tibetan can still be taught to young monks.

Mr. Tashi said he first learned to read and write Tibetan in primary school and from older brothers who had studied with a monk. He continued studying as a monk himself for three years, and in 2012, he took private classes in Yushu for a few months.

He thought he might take his nieces to those classes, but found they had been shut down. “My nieces want to become fluent in Tibetan but don’t know where to go,” he said. “Our words will be lost to them.”

This entry was posted in Headlines, Tibetan and tagged Culture, Tibetan. Bookmark the permalink.