Posted on 11/29/2015 by editor | Guo Baosheng: Is Death Through Maltreatment Becoming Routine for Chinese Political Prisoners?已关闭评论

China claims that it doesn’t have any political prisoners, but in a broad sense all of those who have been jailed or imprisoned for challenging the Chinese Communist Party on behalf of human rights or political justice ought to be considered China’s political prisoners. Before the policy of “reform and opening up” in 1979, counterrevolutionaries and other political prisoners were put under strict guard and treated worse than other criminals, and it was common in those days END_OF_DOCUMENT_TOKEN_TO_BE_REPLACED 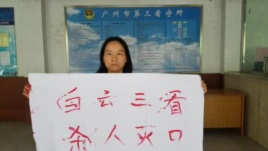 Chinese paramilitary police march near Tiananmen Square in Beijing, March 7, 2014.
AFP
A Chinese rights activist from the southern province of Guangdong has died in a police-run detention center, in what his family says are suspicious circumstances.

Zhang Liumao was reported dead by authorities in the Guangzhou No. 3 Detention Center in the early hours of Wednesday morning, but his family has been prevented from viewing his body, they told RFA.

Zhang had been charged with “picking quarrels and stirring up trouble,” END_OF_DOCUMENT_TOKEN_TO_BE_REPLACED