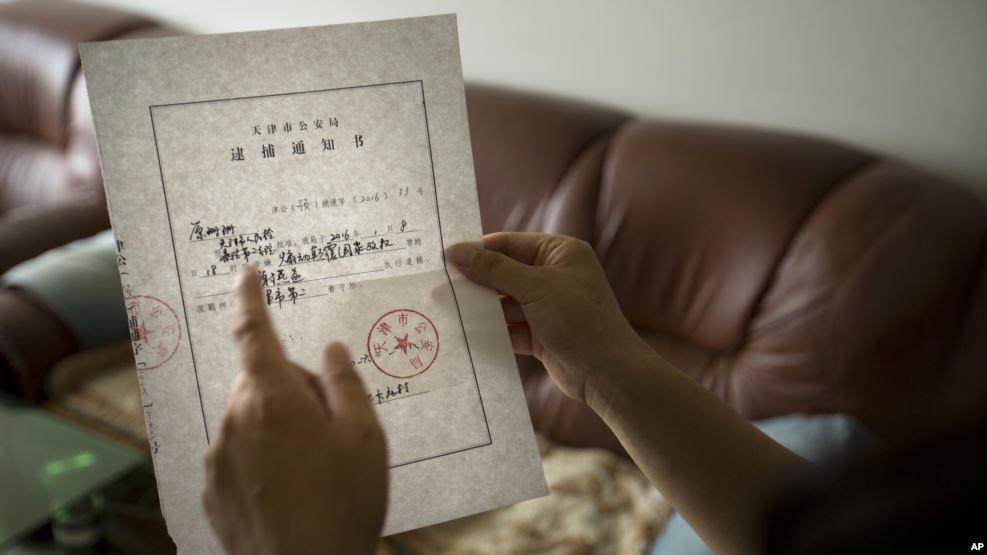 But so far, they say that all they’ve gotten in return is a cold shoulder from authorities.

While the government’s indifference to their call for justice comes as no surprise, they have been unrelenting in voicing their frustrations about what they say are authorities’ ruthless tactics. That includes violence and the use of surveillance to harass families and friends of lawyers who have dared to challenge what many say has been a heavy-handed crackdown.

“Outside my doorstep, there are constantly five to seven [agents] who keep a close watch over me. They follow me where I go, shopping or anywhere else. They do nothing but keep an eye on me,” Yuan Shanshan, wife of rights lawyer Xie Yanyi, told VOA.

“Such a law-breaking act has not only had a negative psychological impact on us and people in my neighborhood, but also tainted the country’s national image. And that has triggered unrest in people’s lives,” Yuan added. 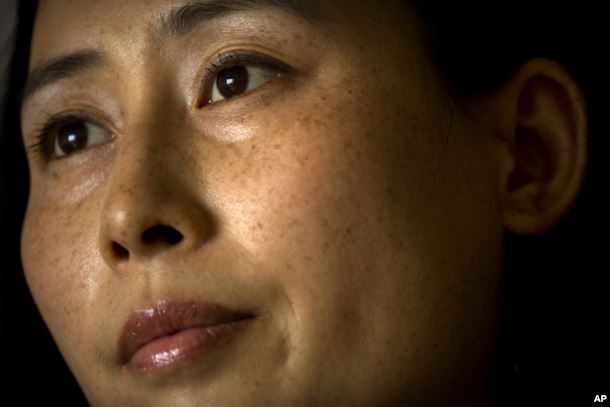 China Lawyers Crackdown: In this Wednesday, July 6, 2016 photo, Yuan Shanshan, the wife of detained Chinese lawyer Xie Yanyi, pauses during an interview in their apartment in Miyun, on the outskirts of Beijing.

Xie is among some 16 human rights lawyers who remain in custody after the start of the massive crackdown last July. More than 300 rights defenders and activists have been arrested, beaten, harassed or put under surveillance.

According to Yuan, wives of detained lawyers have been deprived of fundamental rights to meet with their husbands or hire lawyers for them, not to mention their basic demand for an open and fair trial.

She added that the appeals she and Wang Qiaoling, the wife of Li Heping, filed to dismiss government-appointed lawyers in their husbands’ cases have been repeatedly ignored or rejected. 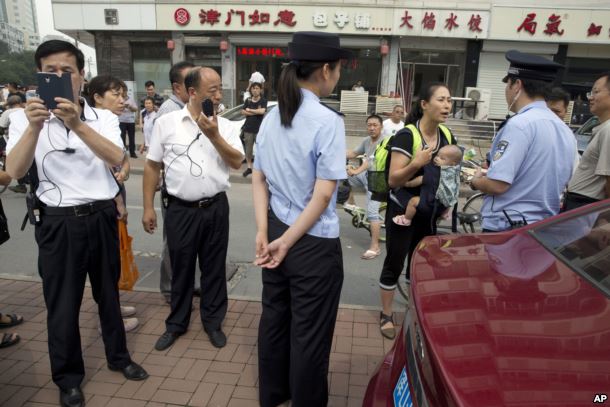 Yuan Shanshan, third right, the wife of detained Chinese lawyer Xie Yanyi, carries her child as she talks to a police officer while other plain clothes security personnel film journalists near the Tianjin No. 2 Intermediate People’s Court in northern China’s Tianjin Municipality on Tuesday, Aug. 2, 2016.

All of this comes despite Xi’s pledge to uphold the rule of law in late 2014 during the fourth plenary meetings of the 18th Communist Party’s central committee.

During that meeting, China’s top leader promised sweeping judicial reforms while hailing the overarching role of the Constitution in the country’s legal system. Critics say those lofty pledges have fallen far short of reality.

In their open letter, the families describe the lawyers’ crackdown as “an arrest, a smear campaign and a torture with a level of power abuse on a massive scale but little possibility for fair trials.”

The families also called on Xi to rein-in the country’s law enforcement officials at all levels, who they argue have colluded with one another and overstepped their powers. They also urged Xi to take steps to ensure a more healthy environment for legal defenders to practice law.

The wives of the detained lawyers also say they are confident that if their husbands were given fair trials, they would be proven innocent and set free.

Although the Chinese government’s tactics have made work for lawyers increasingly difficult, authorities are introducing even more stringent measures, extending its warning to the nation’s 22,000 law firms, which will soon be required to keep their lawyers in line or face penalties.

Such provisions are included in the Ministry of Justice’s newly-amended Administrative Measures for Law Firms, which are slated to take effect on November 1.

Analysts say the ministry’s new rules are unconstitutional and will curb lawyers’ independence, damage their efforts to responsibly represent their clients and discuss defense strategies, and heighten risks for lodging complaints about abusive law enforcers. They say the new regulations could make it easier for such actions to lead to their dismissal by their law firms.

For example, under article 50, law firms will now be asked to fire lawyers for what is defined as misconduct such as public comment on their cases and the defense of cults. Otherwise, the law firms may risk having their own license revoked. The article also includes vaguely-phrased provisions that punish lawyers for others’ behavior, such as demonstrations in support of their defendants in cases of political persecution.

In fact, these rules are nothing new and have long existed as an internal control for the regulator to resort to in a selective manner, according to Liang Xiaojun, director of Beijing Daoheng Law Firm.

“But now, stipulating these rules formally and explicitly is obviously a repressive move,”Liang said.

Liang is among a group of 168 lawyers who earlier endorsed a petition to the State Council to repeal the ministry’s new controls. But in return, they say they have also received an equally cold shoulder.

“I admire these lawyers who have been willing to come forward to defy the flawed law. They have shown their stance of refusing to acknowledge, recognize and execute the measures. We need more lawyers to join the fight,” he added.

The new measures raise the stakes for lawyers considering joining the fight. Many human rights groups have concluded that the government actions will have a chilling effect on lawyers who work on politically sensitive cases.