Posted on 08/11/2016 by editor | Tienchi Martin-Liao: Yu Jie and the Leviathan State已关闭评论 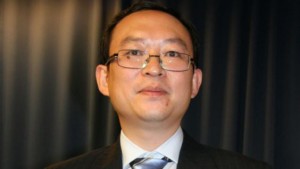 Chinese writer-in-exile Yu Jie attempts to reconcile his past life in China and his present life in the United States.

Yu Jie has been described as “one of China’s most prominent essayists and critics” byIan Johnson in New York Review of Books. One of the most versatile contemporary Chinese writers, Yu Jie was born in Sichuan and educated in Beijing. He had a career in Beijing before he fled to Virginia in 2012, where he has been living in exile since then. Over the past ten years he has published over 30 books, in addition to his regular writing for online or print media. His vivid language and sharp political and social critiques have attracted readers young and old, even touching the nerve of theLeviathan state. Consequently, the monster stretched out the claws, so he must flee.

Yu Jie, now 43, became famous in China through his critical writing in the nineties (in particular with his essay volume Fire and Ice, published in 1998). However his straightforward longing for freedom and justice in the society collided with the autocratic state’s ideology. Within two years,his work could no longer be published in China. Yu Jie became acquaintances with Liu Xiaobo, who has had a great influence on him. He admires Liu not only for his insight of the nature of power and the subjects of politics; it is the strong spiritual and moral strength behind Liu’s writing that inspires Yu Jie.

Together with his wife, Yu Jie became a Christian in 2003. He loves to use Thomas Hobbes’sLeviathan as a basis for analyzing the state power. In the preface of his newest book, The Human Being is the Illuminated Dust (Ren shi bei guang zhao de weichen, Taipei, 2016), Yu Jie quotes from The Bible, Job 41: “Can you pull in the Leviathan with a fishhook or tie down his tongue with a rope?” In this book, he interviewed eight priests, religious scholars and activists from Taiwan, China, Hong Kong and the United States. In his eyes, the Chinese government is the Leviathan, who destroys and devours whatever it confronts, no matter if it is physical stuff or human beings. Through these interviews, we know that in Zhejiang province alone over 1,500 churches and worship places have been demolished by the Chinese government. After destroying the houses of worship it sets up their officially controlled “patriotic churches.” Similar things happened in Hong Kong: Beijing lets the dummy religious representatives have 10 seats in the Legislative Council to demonstrate “religious freedom,” Chinese style.

Even in Taiwan, although there are no state Leviathan threats, religion is influenced by competing political parties, so that it needs to have integrity in protecting the independence and originality of the religion. The interview with the aborigine Bunun-priest, the disabled Bai Guangsheng, is a persuasive example.

To escape the torture and harassment of the security police in China, Yu Jie went into exile with his family. He found a “brave new world” in the United States and enjoyed freedom as a human being and as a writer. He soon finds out that he cannot copyThomas Mann’s model: “Where I am, there is Germany.” Yu Jie is not in China, but in the English world, where a language is used that he does not master. Intelligent as he is, Yu discovers a perfect alternative.

During my recent trip to Taiwan, I met Yu Jie in a book store, where he was giving a talk to the young audience about his newly published book, I’ll Go Your Way Too (Wo ye zou ni de lu, Taipei 2016). He told me happily that he now lives between the U.S. and Taiwan and his writing finds echoes on the island. In average, he publishes two to three books yearly in Taiwan. He is very impressed with the democratic political system in Taiwan and is convinced that it could be a guiding model for China. Yu Jie draws the “Taiwan roadmaps of democracy.” He travels from one historical place to the other, where significant events like protests, conflicts or fights between government and grassroots forces happened in the past decades. He interviewed former dissidents, activists, political prisoners, etc. and wrote down their story in colloquial language. Reading the book is like walking through the contemporary history of the island, following how the Taiwanese people broke free from the autocratic Kuomintang government and arrived at today’s status of prosperity and liberty. With this book series, Yu Jie wants to remind the young people in Taiwan that democracy is not a free lunch; it is the result of constant struggle and sacrifice of the older generation. He also wants to share these precious examples to his compatriots in China. Freedom and democracy have been achieved in Taiwan, so it could be achieved in China as well.

Yu Jie is conscious of his role as a mediator. He tells the people in Taiwan the other side of the story: how the Chinese in the Mainland are fighting for freedom. After his Liu Xiaobo biography that was published both in English and Chinese, he composed another book of Liu Xiaobo: From June Fourth to Zero Eight (Cong liusi dao lingba, Taipei 2016). In this volume, he collected Liu’s articles and open letters from 1989 to 2009, published in different websites and print medias, and arranged the texts in chronological order. The reader can clearly follow Liu’s thoughts through the abnormal phenomenon of China’s society. For people in Taiwan who have deficit knowledge about the Mainland, it is like a textbook of contemporary China.

The year 2016 is only half over, yet Yu Jie has already published three important books. Through his work, one can conceive of his effort to mediate his different worlds: the world where he lived in the past, the world in which he lives presently and the world he wishes to live in in the future. In building the bridge between the two, he becomes a part of its structure.