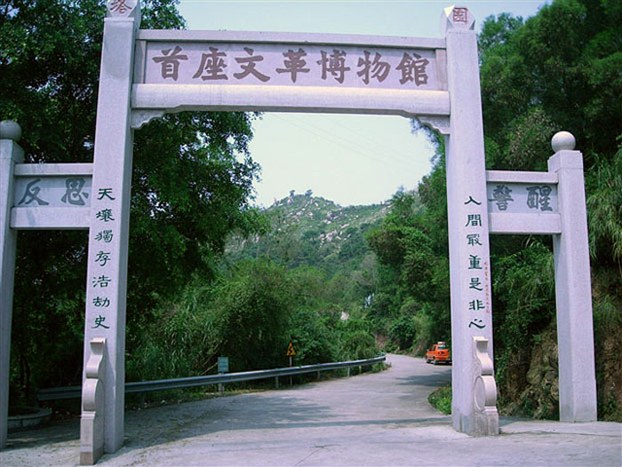 The entrance to Guangdong Shantou the country’s first museum of the Cultural Revolution is shown in this undated file photo. Network Graphics

Authorities in the southern Chinese province of Guangdong have apparently clamped down on the only museum dedicated to the Great Proletarian Cultural Revolution, 60 years after it was launched by late supreme leader Mao Zedong.

While the ruling Chinese Communist Party has yet to allow any national memorials to the decade of chaos and political violence that ran from 1966 to 1976, officials in Guangdong built the museum a decade ago to honor those who died in widespread violence.

The museum, which is privately financed and advertises only online, has been open since 2005 in a discreet location at the top of Tashan, a mountain where many of the Cultural Revolution dead from the nearby city of Shantou were buried.

But according to Hong Kong’s Ming Pao newspaper, signs showing the way to the museum have been covered over with banners that read “Core socialist values propaganda exercise,” among other slogans, or in places by the Chinese flag.

At the museum itself, a statue of Marshal Ye Jianying, who spearheaded the coup that overthrew the Gang of Four and put an end to the Cultural Revolution, has been masked with bamboo scaffolding and swathed in sheets of plastic, the paper said.

Guangdong-based rights activist Liu Sifang said the museum is an important focal point for reflecting on China’s recent history, which shouldn’t be covered up.

“The taboos around the mistakes and evil things perpetrated by the Chinese Communist Party during the Cultural Revolution era should be gradually lifted; this is an inevitable trend,” Liu said.

“In today’s information era, it’s a bit random and ridiculous to try to stop the truth about our history being uncovered in this way,” he said.

Cai Yongmei, editor of the Hong Kong-based political magazine Kaifang, said that the party line on the Cultural Revolution is neither to deny that mistakes were made, nor to assign the blame for them to Mao.

“But the Gang of Four were blamed, and Mao was let off scot-free.”

Local residents from Shantou told RFA in 2006 that attacks and beatings were commonplace during political “struggle sessions,” and the museum sits near an unofficial cemetery of victims of the turmoil.

Others died in widespread fighting between the armed militia groups belonging to different political “factions,” they said.

Every official in Shantou was dragged out into public and ‘struggled against,’ according to contemporary accounts. Throughout the course of these struggle sessions all of these officials were either beaten to death or shot and killed.

According to official records, during the Cultural Revolution in Shantou roughly 100,000 people were implicated in criminal cases, more than 4,500 were injured or disabled, and some 400 people died.

Of these, 70 are buried in graves all sizes scattered around the slopes of Tashan, including one common grave where 28 people are buried together.

Cai said there has been no full public debate on the era in Chinese history, when neighbors, colleagues, and families denounced, attacked, killed, and even ate one another in a frenzy of political violence.

“Now that we are marking the 50th anniversary this year, we can see very clearly that the failure to utterly reject the [violence] of the Cultural Revolution has left us with serious scars,” she said.

Cai said there are fears that the consolidation of power in the hands of President Xi Jinping and ongoing anti-corruption campaigns are the modern-day equivalent of Maoist politics.

“We are seeing this tendency to praise Chairman Mao’s actions during the Cultural Revolution re-enacted today,” Cai said. “There was a concert of revolutionary songs recently, run by the Central Propaganda Department in the Great Hall of the People.”

“I thought that was very scary when I saw it; they even included quotes from the Mao era and all the old songs got an airing.”

The power of song

Meanwhile, China has been using the power of song to make foreign policy points, too.

Chinese state television showed the extent of construction on Fiery Cross Reef, one of the artificial islands China has built on outcrops also claimed by the Philippines.

“This is partly about sending the message that China has the capacity to protect [its interests in] the South China Sea,” Shanxi political activist Deng Taiqing told RFA on Wednesday.

“It’s also about the internal power struggles [within the party] … because Song Zuying is rumored to have high-level political connections,” Deng said.

Ouyang Yujing, director-general of Chinese Foreign Ministry’s Department of Boundary and Ocean Affairs, warned on Friday that international criticism of its construction work on a number of disputed islands and reefs could backfire.

“Of course we’re willing to take on board constructive comments and criticism by the relevant countries,” Ouyang told reporters. “But if they are aimed at putting pressure on China or blackening its name, then you can view it like a spring, which has an applied force and a counterforce. The more the pressure, the greater the reaction.”

Reported by Yang Fan and Qiao Long for RFA’s Mandarin Service.Translated and written in English by Luisetta Mudie.