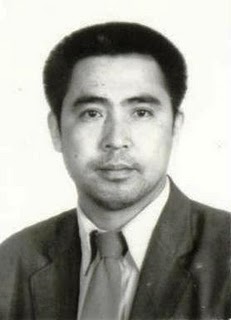 Hada (November 29, 1955 – ), a Mongolian editor, scholar and social activist, was sentenced in 1996 to 15 years’ imprisonment on charges of “splitting the country” and “espionage” for organizing activities related to ethnic self-determination and autonomy, and for writing and publishing related materials.

In 1986, he became a graduate student at Inner Mongolian Normal University, where he studied the philosophy of Marxism and obtained a master’s degree in politics in 1989. Later that year, Hada and his wife, Xinna, were given official permission to open the Mongolian Academic Bookstore, which Guangming Daily praised as the “home of Mongolian learning” right up until Hada’s arrest in December 1995.

In May 1989, Hada and his graduate school classmate Tegexi and others established the Mongolian Culture Rescue Committee, which at its first central committee meeting on May 25, 1992, was renamed the Southern Mongolian Democracy Alliance, with Hada elected chairman. Hada was reelected chairman at the Alliance’s second central committee meeting on September 4, 1994, and Tegexi, who by then was an official in the foreign affairs office of the autonomous region government, was elected vice-chairman. The Alliance established and edited a magazine called The Voice of Southern Mongolia, for which Hada wrote many articles.

Hada went on to write a book entitled The Way Out for the Southern Mongols, in which he depicted decades of Inner Mongolia’s history under Chinese rule, including the harm caused by multiple government-instigated political movements, Han migration and birth control policies. He appealed for Mongolians to defend their civil rights under China’s Constitution, and proposed:

Carrying out a resolute, thorough and persevering struggle against the Han rulers and ultimately and thoroughly overturning their brutal domination.

On August 23, 1995, the Southern Mongolian Democracy Alliance held its third central committee meeting and amended its constitution to read:

This Alliance is a secret organization for the purpose of opposing Han colonial rule and fighting for self-determination, freedom and democracy for Southern Mongolia.

Hada was reelected chairman and appointed Tegexi as propaganda head.

In winter 1995, the Southern Mongolian Democracy Alliance organized a strike by Mongolian students and teachers at Hohhot’s universities and colleges, and held several street protests demanding the implementation of constitutional rights and the drafting of a Basic Law granting genuine autonomy to Inner Mongolia. The authorities used armed force to suppress the movement.

On the evening of December 10, local public security police detained Hada and searched his home and book store. He was formally arrested on March 9, 1996, and on August 19, the Hohhot Municipal People’s Procuratorate indicted Hada and Tegexi on charges of “conspiring to subvert the government; separatism; stealing, obtaining and providing intelligence for the enemy; and organizing and leading a counterrevolutionary clique”.

In a closed trial, the Hohhot Intermediate People’s Court on November 11, 1996, found Hada and Tegexi guilty of “planning, organizing and leading the reactionary ‘Southern Mongolian Democracy Alliance,’ the objective of which is splitting the country”. The verdict cited as evidence the Alliance’s constitution and Hada’s The Way Out for the Southern Mongols, in which he was said to have “comprehensively and systematically elaborated on his ethnic separatist thinking”. Hada was also accused of selling a photocopy of a document, issued by the CPC Committee of the Inner Mongolia Autonomous Region, to a “Mongolian intelligence agent” for US$1,000. It was alleged that “this material was published in overseas newspapers and magazines, resulting in an extremely bad political influence internationally”.

On December 26, 1996, the Supreme People’s Court of Inner Mongolia rejected appeals filed by Hada and Tegexi and upheld their convictions. Hada was incarcerated in the Inner Mongolia No. 4 Prison in Chi Feng, where he was reported to have suffered repeated physical abuse due to his refusal to admit guilt. Tegexi was released three years early for good behavior in December 2002.

Hada’s sentence finished on December 10, 2012, but he was reported transferred to an undisclosed location in Hohhot under house arrest. Prior to this, Hada’s wife, Xinna, and son, Uiles, were also detained on trumped-up charges and were placed under formal arrest on January 17, 2011. Uiles was released on bail after 10 months, and Xinna was handed a suspended three-year sentence for operating an “illegal business” on April 23, 2012. That same day, Hada was sent back to his native place under house arrest. All three family members were kept under close surveillance and prevented from contacting the outside world. Hada suffered from gastric ulcers and coronary heart disease, and his health was reported to have deteriorated under the abusive conditions of his custody.

PEN International and its centers, along with other human rights groups, have continued to express concern regarding Hada, considering him a typical case of the Chinese government’s violation of freedom of expression, publication, association, assembly and other basic rights.The Independent Chinese PEN Center awarded Hada its second Liu Xiaobo Courage to Write Award in 2011. Hada was finally released on December 9, 2014.