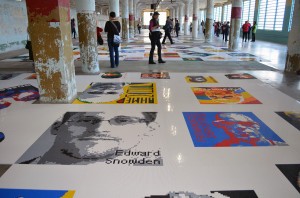 Posted on 07/29/2014 by editor | Tienchi Martin-Liao: Ai Weiwei’s Art and the Chinese Tragi-Comedy已关闭评论

Thoughts on the artist’s one-man exhibition in Berlin. 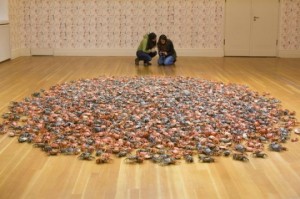 Ai Weiwei He Xie
Ai Weiwei’s piece ‘He Xie’ at the Martin-Gropius-Bau in Berlin. Photo provided by Tienchi Martin-Liao.

An Exclusive Essay By Ai Weiwei: ‘On Self-Censorship’

It’s been a bad month for critics of the Chinese government, starting with the flood of arrests ahead of the Tiananmen Square anniversary. Now officials are battling a single man: their longtime opponent, the world-famous artist Ai Weiwei. END_OF_DOCUMENT_TOKEN_TO_BE_REPLACED

An Exclusive Essay By Ai Weiwei: ‘On Self-Censorship’已关闭评论

Chinese dissident artist Ai Weiwei said Monday that his original posting on Instagram was a statement about the overuse of power in fighting terrorism. END_OF_DOCUMENT_TOKEN_TO_BE_REPLACED

The Chinese artist has sparked an internet meme by posting pictures of people with their legs raised and pointing like rifles. Is it his latest revolutionary act? A new dance craze? Or the next Angelina Jolie’s thigh? We weigh up the options END_OF_DOCUMENT_TOKEN_TO_BE_REPLACED

Five Myths About China (That I’m Sorry I Helped Spread)

On a single day this spring – April 30, though it could be any – readers scanning the news on China had reason to be baffled: They learned that China is poised to vault past the United States on a measure of economic dominance, five years sooner than expected (unless it isn’t). They also learned that China is at risk of a grave economic slump, if property prices continue to sink. They learned that world-classgenetic researchers in Shanghai, flush with far-sighted government investment, have collaborated to produce new insight into aging cells. And, lastly, they learned that a Chinese journalist has vanished into detention for daring to acknowledge a date on the calendar that censors consider taboo: the 25th anniversary of the crackdown at Tiananmen Square on June 4.