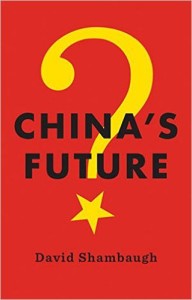 David Shambaugh’s slim volume, China’s Future, stands in stark contrast to the conventional wisdom on China. Indeed, it is hard to discuss ‘China’s future’ without immediately speaking of ‘China’s rise.’ The majority of contemporary literature on China focuses on its military modernisation and ‘string of pearls‘ expansion into the South China Sea. The Interpreter devoted an entire debate series to unpredictability in China’s maritime strategy in 2014. END_OF_DOCUMENT_TOKEN_TO_BE_REPLACED

Posted on 04/03/2016 by editor | Jeffrey Wasserstrom: The Great Fall of China已关闭评论

The country has entered the ‘middle income trap.’ It can only escape by taking the lead in industries that depend on brains—not brawn.

David Shambaugh is certainly prolific. His informative book “China’s Future” follows closely on the heels of “China’s Communist Party” (2008) and “China Goes Global” (2013) and fleshes out arguments first showcased in “The Coming Chinese Crackup,” a much discussed op-ed published in this newspaper a year ago. The George Washington University professor’s basic claim is easy to sum up: Unless the party’s general secretary, Xi Jinping, introduces major political reforms, the economy will tank and the party will crumble. Being too careful a scholar to express certainty about the exact timing of these events, Mr. Shambaugh writes only that they will likely happen in the next decade or so. END_OF_DOCUMENT_TOKEN_TO_BE_REPLACED

An interesting take by an anonymous Chinese tweep.