17 September 2015
Awarding the Nobel Peace Prize to US President Barack Obama in 2009 failed to achieve what the committee hoped it would, its ex-secretary has said.

Instead, the decision was met with criticism in the US. END_OF_DOCUMENT_TOKEN_TO_BE_REPLACED

US Pushes for NGO’s Acceptance Despite China Lobbying 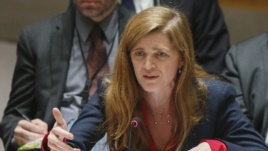 UNITED NATIONS —The United States has launched a campaign to get U.N. accreditation for the non-profit organization Freedom Now, which works to free prisoners of conscience around the world, but the effort is facing opposition, especially from China.

US Pushes for NGO’s Acceptance Despite China Lobbying已关闭评论

Posted on 06/13/2014 by editor | Jailed Nobel Dissident Unlikely to be Released Early: Lawyer已关闭评论

An undated file photo of Chinese dissident Liu Xiaobo.
Eyepress News
Jailed Chinese Nobel peace laureate Liu Xiaobo is unlikely to be granted parole when his sentence comes up for review later this year, his lawyer said on Friday. END_OF_DOCUMENT_TOKEN_TO_BE_REPLACED

Nobel Laureate’s Release from Prison May Hinge on His ‘Regret’

The world has not heard from Liu Xiaobo, its only imprisoned Nobel Peace laureate, for a long time.

Not since his impassioned self-defense in a Beijing court in December 2009, when he declared he had “no enemies and no hatred,” not toward the people who had arrested him, nor the judge who sentenced him on that icy Christmas Day for “incitement to subvert state power” for co-authoring Charter 08, END_OF_DOCUMENT_TOKEN_TO_BE_REPLACED