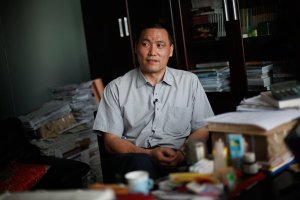 Pu Zhiqiang, speaking to the press under close watch by plainclothes policemen, not pictured, at his office in Beijing, June 1, 2009

In late January, Chinese authorities announced that they are considering END_OF_DOCUMENT_TOKEN_TO_BE_REPLACED Bob Kapp is right that China has a “marvelous cultural repertoire,” that Americans should learn more about it, that Chinese culture is best learned through Chinese language, that Chinese-language programs in North America need more resources, and that it would be nice if China pitched in. END_OF_DOCUMENT_TOKEN_TO_BE_REPLACED 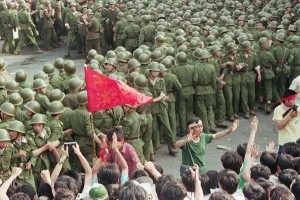 David Turnley/Corbis
Soldiers and demonstrators at Tiananmen Square, May, 1989

The June Fourth Massacre in Beijing has had remarkable longevity. What happened in and around Tiananmen Square twenty-five years ago this June not only haunts the memories of people who witnessed the events and of friends and families of the victims, but also persists in the minds of people who stood, and still stand, with the attacking side. Deng Xiaoping, the man who said “go” for the final assault on thousands of Chinese citizens protesting peacefully for democracy, has died. But people who today are inside or allied with the political regime responsible for the killing remain acutely aware of it.

END_OF_DOCUMENT_TOKEN_TO_BE_REPLACED

Tiananmen Exiles:Voices of the Struggle for Democracy in China Palgrave Studies in Oral History

Posted on 05/14/2014 by | Tiananmen Exiles:Voices of the Struggle for Democracy in China Palgrave Studies in Oral History已关闭评论

Tiananmen Exiles:Voices of the Struggle for Democracy in China Palgrave Studies in Oral History 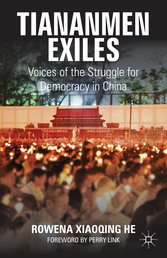 Rowena Xiaoqing He and Foreword By Perry Link

6.000 x 9.250 inches, 240 pages,
In the spring of 1989, millions of citizens across China took to the streets in a nationwide uprising against government corruption and authoritarian rule. What began with widespread hope for political reform ended with the People’s Liberation Army firing on unarmed citizens in the capital city of Beijing, and those leaders who survived the crackdown became wanted criminals overnight. Among the witnesses to this unprecedented popular movement was Rowena Xiaoqing He, who would later join former student leaders and other exiles in North America, where she has worked tirelessly for over a decade to keep the memory of the Tiananmen Movement alive.

END_OF_DOCUMENT_TOKEN_TO_BE_REPLACED

Tiananmen Exiles:Voices of the Struggle for Democracy in China Palgrave Studies in Oral History已关闭评论