Science-Fiction Prize Is Awarded to Chinese Writer for First Time 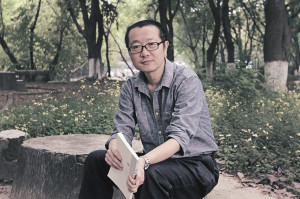 The award is for “The Three-Body Problem,” END_OF_DOCUMENT_TOKEN_TO_BE_REPLACED

Science-Fiction Prize Is Awarded to Chinese Writer for First Time已关闭评论

In 1902, Lu Xun translated Jules Verne’s !–more–>From the Earth to the Moon into Chinese from the Japanese edition. Science fiction, he wrote in the preface, was “as rare as unicorn horns, which shows in a way the intellectual poverty of our time.” Not any more. The Three-Body Trilogy by Liu Cixin has sold 500,000 copies in China since the first volume was published in 2006 (it will come out in English in the autumn). Liu, an engineer, is one of the so-called “three generals” of contemporary Chinese science fiction, along with Wang Jinkang and Han Song.

“Sci fi,” Han says, “can express a lot that can’t be expressed in other literature.” His most recent collection of stories, High Speed Rail, begins with a train crash that recalls the politically sensitive rail collision in Wenzhou in July 2011. In an earlier novella, Taiwan Drifts, Taiwan has broken free from its moorings and is on a literal collision course with the mainland. Unsurprisingly, much of Han’s work isn’t published in the People’s Republic.

Nor is The Fat Years (2009) by Chan Koonchung. Set in 2013, it depicts an “age of Chinese ascendancy” following a massive global financial crash. But the month-long crackdown that launched the golden era is missing from the population’s collective memory, and the water supply is probably spiked with a drug to keep everyone mildly euphoric. “The people fear chaos more than they fear dictatorship,” a high-ranking Party official says.