A Debate Over Tiananmen Finds Echoes in Germany’s Fascist Past 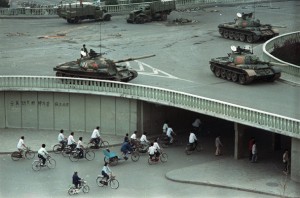 Army tanks hold positions on an overpass in Beijing on June 6, 1989, END_OF_DOCUMENT_TOKEN_TO_BE_REPLACED

A Debate Over Tiananmen Finds Echoes in Germany’s Fascist Past已关闭评论

Su Yutong was told that her contract with Deutsche Welle, the German public broadcaster, would not be renewed in 2015. Credit Benjamin Kilb for The New York Times

BERLIN — In the wake of a debate over the 1989 Tiananmen Square massacre, a well-known Chinese government critic has been fired from her job at a German public broadcaster.

The activist, Su Yutong, 38, who has been exiled in Germany since 2010, was informed Tuesday that her contract with Deutsche Welle would not be renewed in 2015. In a statement on Wednesday, the broadcaster said the decision had been made because she disclosed information about internal meetings and publicly criticized a co-worker.

“It doesn’t have anything to do with an evaluation of what she wrote,” a Deutsche Welle spokesman, Johannes Hoffmann, said in a telephone interview from Bonn. “It’s just that she tweeted about internal issues about the Deutsche Welle in a way that no company in the world would tolerate. We warned her, and she continued to do it.”

Many commentators on Chinese-language social media, however, see more at work, especially because Ms. Su was one of the most prolific bloggers on Deutsche Welle’s widely read Chinese-language website, and often very critical of Chinese government policy. In recent months, they say, more pro-Beijing voices have been given greater prominence.