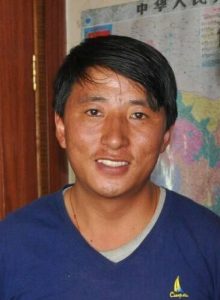 (New York, NY) – PEN America released an open letter signed by nearly 1,000 writers, linguists, translators, and language rights advocates calling for the immediate release of Tashi Wangchuk. Exactly four years ago today, on January 27, 2016, Chinese officials secretly detained Wangchuk for his activism on Tibetan language rights. In 2018, after a one-day trial, he was sentenced to five years in prison on false charges of “inciting separatism.” PEN America has long led a global campaign for Wangchuk’s release.

“We are deeply concerned that Tashi’s arrest and trial have been marked by a lack of due process, including the fact that Tashi was reportedly tortured prior to his trial,” the letter reads. “We believe that the right of everyone to learn, teach and develop their native language must be protected. As such, we call upon the government of the People’s Republic of China to release Tashi Wangchuk, and to honor its own domestic and international obligations to uphold ethnic minorities’ rights to learn and develop their own spoken and written languages.”

“The freedom to write is meaningless without the freedom to speak one’s own language, and PEN America vehemently supports linguistic and cultural rights,” said author Jennifer Egan, PEN America’s president. “Tashi has been unjustly arrested and detained for advocating on behalf of Tibetan speakers throughout China who wish to communicate freely and understand each other. We demand his immediate release, and we demand that his calls for linguistic freedom be satisfied.”

Chinese officials used Wangchuk’s participation in a New York Times documentary and article to charge him with “inciting separatism” in 2016. Wangchuk, who has denied ever calling for separatism, has long been a peaceful advocate for Tibetan language rights, and has advocated for the use of the Tibetan language in both government offices and in education. Chinese officials have severely curtailed the ability of schools and public institutions to teach the Tibetan language and have instituted harsh assimilation tactics that infringe on Tibetans’ linguistic rights.

“Tashi’s continued imprisonment and harsh treatment at the hands of Chinese authorities is a stain on China’s government and its unfulfilled promises of securing the linguistic rights of minority groups,” said James Tager, deputy director of free expression research and policy at PEN America, which organized the open letter. “Tashi’s peaceful advocacy for the Tibetan language is, at its core, advocacy for a universal human impulse: the right to use and celebrate one’s mother tongue. For that, he has been treated like a criminal. Tashi has never had a fair trial, and every day he is imprisoned is a day he is unjustly deprived of due process and his freedom.”

Prior to his arrest, Tashi had attempted to sue the Chinese government to restore the use of the Tibetan language in Yushu prefecture, a predominantly Tibetan populated area outside the official Tibetan Autonomous Region. While that earned him an international reputation, it led to reprisals from the Chinese government, including his eventual imprisonment. Tashi was held for months without his family being notified, and his right to access a lawyer reportedly remains severely curtailed.

Michel Anne-Frederic DeGraff, Linguistics Society of America:
“The Chinese government’s effort to label Tashi’s linguistic advocacy as ‘separatism’ is something that strikes at the heart of linguistic study. Simply put, advocacy for one’s native language is no crime. On the contrary, it’s a basic human right. As linguists, we also know that teaching children in their native language is fundamentally a matter of educational best practice, as it provides them with the best tools for effective literacy and for quality education in all subject matters. The LSA is proud to have signed the petition for Tashi’s release, not only because of the moral urgency of calling for his release, but because we recognize the clear benefits of the sort of native-language education that Tashi was advocating. We do hope that Tashi will be freed and that he will be able to continue helping his community.”

Paula M. Krebs, Modern Language Association:
“As members of the MLA community, we understand that preserving a language is vital to preserving a culture. And we recognize that freedom of expression is fundamental to the pursuit of education and equality for all people. The continued imprisonment of Tashi Wangchuk has broad implications for the increasing suppression of these basic rights in China and for free expression worldwide. To put it simply: linguistic rights are human rights.”

Catrina Wessels, PEN Afrikaans:
“PEN Afrikaans unreservedly joins the call for Tashi Wangchuk’s release. We believe strongly that linguistic diversity should be preserved and that peaceful language advocacy, conducted entirely within the parameters of local and international laws, should be celebrated, not punished.”

Every year on 10 December the international community celebrates the anniversary of the proclamation of the Universal Declaration of Human Rights. This anniversary is an opportunity for both the EU and China to examine their progress in protecting the human rights of all persons. END_OF_DOCUMENT_TOKEN_TO_BE_REPLACED